Justin Bieber posted a photo of himself with a mystery brunette on Sunday night, sending Instagram into a frenzy. It didn’t take long before the internet learned that the new girl hanging out with the “I’m the One” singer is Audreyana Michelle.

The stunning model is a mix of American, African American, and Native American.

Over two million Bieber fans liked the above photo on Instagram within 16 hours of it being uploaded to Bieber’s account.

Fans immediately started wondering who the girl in the photo was and were questioning if she was dating Bieber.

Bieber didn’t caption the photo and he has not said anything about hanging out with Audreyana Michelle. On Monday, it was announced that he was cancelling the remainder of his Purpose World Tour. Since the last photo that Bieber posted on social media was the one of him with Audreyana, fans have been posting nasty messages to him in the comments section.

2. Audreyana Michelle Was on a Hike With Bieber at the Time the Photo Was Taken

Shirtless Justin Bieber Looking Happy With Stunning Brunette While Hiking In HollywoodSunday, July 23, 2017 – Justin Bieber was in a super friendly mood as he hit the Hollywood Hills for some hiking with a stunning brunette. On the way in Bieber was super friendly with photographers, telling them he'd, "see them on the way down," and as he left, he teased a photographer about what…2017-07-24T01:38:45.000Z

Bieber and Audreyana Michelle were spotted by the paparazzi on a hike over the weekend. Bieber was shirtless, wearing black shorts with his Calvin Klein underwear band visible. Meanwhile, Audreyana was dressed casually in ripped black jeans and a white top. She paired her look with a black bomber jacket and white sneakers.

The two were not holding hands, but they were alone and fans do think that they are an item.

In an interview with Frankie’s Bikinis, Audreyana revealed that she loves going for runs and mountain hikes to get exercise.

3. Audreyana Michelle Is a Model & Has Done Work for the Kardashian/Jenner Brands

Audreyana Michelle is a 17-year-old model. She has contracts with Next Miami, Premier London, and Freedom Models Los Angeles. Since starting her career, she has landed modeling gigs with companies such as Pac Sun, Tobi, LPA the label, and PRISM Boutique.

She has modeled for Khloe Kardashian’s line, Good American, and has done some work for Kylie Jenner’s cosmetics line, according to X17.

When asked by Frankie’s Bikinis how and why she got into modeling, she said her mom encouraged her.

“My mom submitted me to an agency in the summer 2016 and it took off from there! I’ve always wanted to model and to be able to share my love of fashion through photography. I also think its great to inspire other girls/guys that they can follow their dreams no matter where they’ve come from,” Audreyana told the company.

While 300,000 followers might be considered small potatoes to Bieber’s 90 million, people are just starting to learn about Audreyana Michelle. Now that she has been spotted with the Biebs, her popularity will undoubtedly rise.

5. She Considers Herself ‘Outgoing, Considerate, & Fun’

In a Q&A with Frankie’s Bikinis, Audreyana Michelle described herself in three words: Outgoing, considerate, and fun. 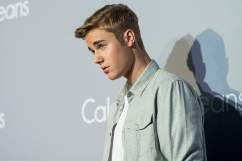 Justin Bieber Dating: Does the Singer Have a Girlfriend?

Read More
5 Fast Facts, Justin Bieber
Audreyana Michelle has been identified as the mystery brunette that was hanging out with Justin Bieber over the weekend.