The 2017 edition of the Boston Pops Fireworks event airs tonight at 8 p.m. on Bloomberg Television and there is a big lineup of performers. This is the 44th year that the event has taken place and this year, the hosts are Alix Steel, Carol Massar and Matt Miller. Get the details on each of tonight’s performers below.

Brian Stokes Mitchell is an actor as well as a singer and tonight he will perform as part of Boston Pops. He has appeared on Broadway and even won a Tony Award for Best Actor in a Musical in 2000 for his performance in “Kiss Me, Kate”. He has also done voice-overs for years, for shows including Pound Puppies, The Addams Family, Paddington Bear, Pinky and the Brain and the Flinstones.

Odom has appeared in the hit Broadway musical “Hamilton” and he is an award-winning performer, having a Tony Award and a Grammy under his belt. He is also known for his role as Sam Strickland in the 2013 musical television series Smash. Other hit shows he has appeared on include Gilmore Girls, Grey’s Anatomy, Supernatural, and The Good Wife.

Andy Grammer is a popular singer and songwriter, known for hit songs including “Fresh Eyes”, “Keep Your Head Up” and “Honey I’m Good.” Just a couple weeks ago, Grammer released a new single featuring LunchMoney Lewis titled “Give Love,” so there’s a good chance he could perform that tonight. Currently, Grammer and his singer wife are expecting their first child together and some may recognize his wife from a televised audition on The Voice.

One down, one to go! Tune in to @bloombergtv tomorrow at 8pm ET for more #militarymusic and #fireworks! #4thofjuly #independenceday

The U.S. Army Field Band is set to perform. In addition the Middlesex County Volunteers Fifes & Drums will also participate.

Melissa Etheridge is a music icon known for songs including “Come to My Window” and “I’m the Only One.” Etheridge has a star on the Hollywood Walk of Fame, an Academy Award and a couple of Grammy Awards to her name. 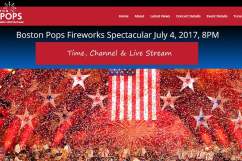 Boston Pops Fireworks Spectacular 2017: What Time & Channel Is the Show On Tonight?

Read More
4th Of July, Independence Day, July 4th
Who is performing at the 2017 Boston Pops Fireworks Concert tonight? Get the rundown on the lineup of performers here.