Previously on The Bachelorette, Bryan Abasolo revealed to star Rachel Lindsay that a previous relationship ended because of his mother. This worried him, scared that the same problem might occur with his mom and Lindsay. For Abasolo’s hometown date on tonight’s episode of the show, ABC describes his date as this:

Bryan is anything but shy when it comes to expressing his feelings for Rachel. She meets him in his hometown of Miami, visiting the famous Calle Ocho where the pair try salsa dancing, playing dominoes and sampling some tasty street food from Columbia. However, there are dark clouds looming as Rachel is fearful of not getting Bryan’s mother’s approval – a problem that broke up his last relationship. Although Rachel does her best to convince his mom that she would be the perfect daughter-in-law, Bryan’s mother is clearly suspicious of her son’s new relationship.

Check out a clip of Abasolo’s hometown date with Lindsay in the below video.

So, who is Abasolo’s mother? According to Romper, Abasolo’s family is devoutly Catholic and his mother spent Carnival 2016 dressed as a nun. It’s clear that faith is important to the family on some level, which potentially is a good thing since Lindsay feels the same way about faith as well. Prior to meeting his mom, Abasolo described her to Lindsay as a fireball and said that his being with someone is huge to her because he is his parents’ only child.

When Abasolo sat down with Abasolo’s mother, she says she’s shocked that he has fallen for a girl on a TV show. As for Lindsay, when she talks to Abasolo’s mom, his mother says that her son is her life. She also warns Lindsay that if she marries Abasolo, she is marrying the family.

In the past, Rachel Lindsay has said that she wonders if Abasolo is “too good to be true.” Perhaps his mother is the only fly in the ointment.

WARNING: IF YOU DO NOT WANT TO KNOW BRYAN ABASOLO’S FATE ON THE SHOW, STOP READING NOW.

Well, whatever the issue is with Abasolo’s mother, it doesn’t seem to be an issue right now since Reality Steve reports that the winner on the show this season is Bryan Abasolo. That’s right. According to Reality Steve, the two are engaged. 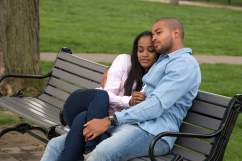