Getty Brad Delson and Chester Bennington perform during funeral services for Soundgarden frontman Chris Cornell at Hollywood Forever Cemetery on May 26, 2017 in Hollywood, California. The grunge-rock icon was pronounced dead in the early morning hours of May 18 after a Soundgarden performance that evening in Detroit. He was 52.

Bennington, 41, died on July 20, 2017 after committing suicide as Cornell did in May, TMZ is reporting. Bennington’s performance of “Hallelujah” at Cornell’s funeral was heartbreaking at the time, but it’s even more heartwrenching to listen to now in the wake of Bennington’s own loss. You can listen here:

According to Consequence of Sound, “As part of the service, Linkin Park frontman Chester Bennington, a close friend and godfather to one of Cornell’s children, sang Leonard Cohen’s ‘Hallelujah.'”

The tragic news of Bennington’s suicide was confirmed by TMZ. TMZ reported that Bennington was found dead on July 20 at a Los Angeles estate. He leaves behind a wife and six children.

The singer’s cause of death was suicide by hanging, according to the entertainment website. Tragically, Bennington committed suicide on what would have been Cornell’s birthday. Cornell was born on July 20, 1964.

After Cornell died of suicide on May 18, 2017 in Detroit, Bennington penned a moving tribute to his lost friend on Twitter in the form of a letter. Cornell was 52 when he died.

“Thoughts of you flooded my mind, and I wept,” he wrote in part. “You have inspired me in many ways you never could have known…I can’t imagine a world without you in it. I pray you find peace in the next life.”

According to Spin.com, “When he toured with Linkin Park in the late-’00s, Bennington would join Cornell to sing Temple Of The Dog’s ‘Hunger Strike’ and Cornell would repay the favor and help sing ‘Crawling.'”

Linkin Park dedicated a title track in its album to Cornell. One More Light was a tribute to the Soundgarden great.

You can read more about Chester Bennington’s death here: 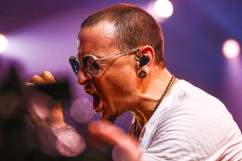