Linkin Park singer Chester Bennington was found dead inside his home in Palos Verdes Estates in L.A. County. According to TMZ, he was found dead around 9:00 a.m. on Thursday. The 41-year-old singer was married to his second wife, Talinda Bentley.

Bennington was a proud father to six children. When he wasn’t on tour, Bennington loved spending time with his six little ones. Although he rarely shared photos of them, it was clear that he loved them very much.

I have the cutest kids ever

Bennington had one child, a son named Jamie, with former girlfriend Elka Brand. Jamie was born on May 12, 1996. He decided to adopt Brand’s son Isaiah. The adoption process was finalized in 2006.

Bennington was still close to Elka even after their split. They were able to raise their boys amicably. As evidenced by the photo below (which shows Bennington with the three women who birthed his children, Elka is on the far right). 2. He Had Another Boy With His First Wife

His second son was with his first wife Samantha Marie Olit. The two married in 1996 and welcomed Draven Sebastian six years later on April 19, 2002. Bennington and Olit split in 2005.

The photos below show Olit with Draven.

3. He Had 3 Children With His Second Wife

Bennington remarried in 2005. He and Talinda Bentley had three children together; a son named Tyler Lee, and two twin daughters, Lily and Lila.

His children were a big part of his everyday life. Although he kept his personal life private for the most part, he was a big family guy and really loved spending time with his kids.

“Let me give you a typical day. I’m a recovering alcoholic, that’s the first thing. I have a big family. I’ve got three kids in college, one in high school, one in fifth grade and twin girls who are 5; they are in pre-K. I have two pigmy goats, three bantam chickens, a tortoise, six dogs, two cats, fish, so I have a farm,” Bennington said during a 2016 interview with the Las Vegas Review Journal.

4. He Is a Godfather to 1 of Chris Cornell’s Kids

Bennington was very close friends with Chris Cornell, the lead singer of Soundgarden, who died of suicide on May 17. The two were so close, in fact, that Cornell asked Bennington to be godfather to one of his children. The photo above shows Bennington at Christopher Nicholas’ baptism.

The day after Cornell was found dead, Bennington posted the following message on social media.

“Dear Chris, I dreamt about the Beatles last night. I woke up with Rocky Raccoon playing in my head and a concerned look on my wife’s face. She told me my friend has just passed away. Thoughts of you flooded my mind and I wept. I’m still weeping, with sadness, as well as gratitude for having shared some very special moments with you and your beautiful family. You have inspired me in many ways you could never have known. Your talent was pure and unrivaled. Your voice was joy and pain, anger and forgiveness, love and heartache all wrapped up into one. I suppose that’s what we all are. You helped me understand that. I just watched a video of you singing ‘ A day in the life ‘ by the Beatles and thought of my dream. I’d like to think you were saying goodbye in your own way. I can’t imagine a world without you in it. I pray you find peace in the next life. I send my love to your wife and children, friends and family. Thank you for allowing me to be a part of your life. With all of my love. Your friend, Chester Bennington.”

5. He Stopped Touring With Stone Temple Pilots Because of His Kids

Earlier this year, Bennington opened up about his family, saying that he quit the Stone Temple Pilots tour because of his children.

“I had so much fun. I actually still get to play with those guys every once in awhile, I have a deep deep love. The only reason why I’m not doing it now is my kids, they would cry every time I would go on the road with STP. When I leave on tour with Linkin Park, they’re like, ‘Okay, we’ll see you when you get back.’ They understand what I’m doing, but when I would leave with STP they would cry. I started realizing, I think they thought I was choosing to do that over being at home with them, because I would be done with Linkin Park and coming home. It was just too hard on my family, so I basically was like, you know what, I’ve got to stop being selfish here. When I’m not doing Linkin Park, I’ve got to be home with my babies,” he told Q104.3, according to Alternative Nation. 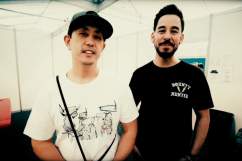