The music industry has been struck with yet another tragic loss of one of its legends.

Chester Bennington, the lead vocalist for the band Linkin Park, was found dead inside of a residence in Los Angeles County on July 20, TMZ reported. Law enforcement sources told the news outlet that he was alone in the home at the time and was found by an employee around 9 a.m.

Bennington, 41, is survived by his wife, Talinda, and his six children.

Bennington had been the frontman of Linkin Park since the band came out with its popular debut album, Hybrid Theory in 2000. He stayed with the band ever since, except when he spent some time replacing Scott Weiland in Stone Temple Pilots from 2013-2015. He’s re-joined and played with his bandmates in Linkin Park ever since.

The last show Bennington and Linkin Park played together before his death was July 6 at Barclaycard Arena in Birmingham, England.

A review of the show by Birmingham Mail said that it took a while for the crowd to get into it. But once “One Step Closer” was played, the audience was in bliss. At one point during the show, Bennington paid tribute to the victims of the Manchester terrorist attack prior to playing a set of slower tracks.

Click here to see a video of the full set from the Birmingham show.

See the full setlist from the show, according to Setlist.fm, below:

Castle of Glass (Experience Version; 2017 ending w/ “A Place for My Head”)

Lost in the Echo (shortened version)

Waiting for the End (“Remember the Name” intro)

The band was scheduled to embark on a world tour starting July 27 in Mansfield, Massachusetts, but those plans will likely be put on hold. 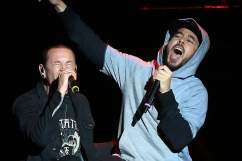