Tamra Judge was born Tamra Sue Waddle, before she married and divorced Darren Vieth and Simon Barney. Today, she is the wife of fellow Real Housewives of Orange County star Eddie Judge and she has four children from her previous marriages. Her eldest son, Ryan Vieth, is from her first marriage to Darren Vieth, but viewers do not often hear about Vieth.

Over the years, Tamra’s son Ryan was at odds with his mom’s second husband Simon Barney, but it 2013, he sang his praises over biological father Darren Vieth. Ryan told Wetpaint:

I do not speak to my father, Darren, for many reasons — funny how he suddenly wants to look like a good father. Simon [Barney] was more of a father figure than my dad ever was to me.

What Ryan is referring to in the above statements is his father’s alleged plans to sue his mother Tamra at the time. Wetpaint reports that the lawsuit was for Tamra supposedly claiming that Vieth cheated on her with a man. In response, Vieth accused Tamra of being a “bad mother” and leaving Ryan on his porch to care for him, which Ryan says is untrue. Ryan’s response was:

My mom never gave me up as a child, only asked for my dad to step it up and help out when she was going through a difficult time. My mom has always been in my life even when she was struggling. It’s disgusting that he is trying to go after my mom by spreading lies. Everyone wants [their] 15 minutes of fame! I feel sorry for him and hope that one day he will have peace in his life. I’m trying to keep my life positive and want nothing to do with him. Bottom line, I know who’s in my life, and its not him.

Vieth also told Radar Online that Tamra lied when she said their marriage break up led to her attempting suicide. And, Radar alleges that court papers show Tamra voluntarily gave up custody of their son Ryan to Vieth in 1995. But, Tamra was reportedly broke at the time.

Regardless of what happened, it’s clear that there is bad blood and that Ryan Vieth is estranged from his father.

Vieth and Tamra Judge were married and then separated in 1990. 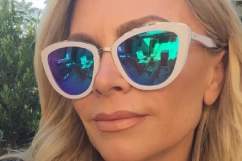