Dragonstone is going to play an important role in tonight’s Game of Thrones premiere. In fact, that is what the premiere is titled! But what exactly is the importance of Dragonstone? What have we learned about it on the show so far? Dragonstone has actually been featured a lot on Game of Thrones. Learn all about Dragonstone’s history in this quick refresher below.

Dragonstone is the name of a castle (and an island) in Blackwater Bay. It was once the seat of House Targaryen, and when the series began it was controlled by House Baratheon. More specifically, it was controlled by Stannis. The castle is secure and difficult to breach.

What’s amazing about Dragonstone is its history. The castle was built using advanced Valyrian techniques. Daenerys was born in Dragonstone, and her mother Queen Rhaella Targaryen died giving birth on a stormy night. (Hence, the Stormborne in Daenerys’ name.) Dany and Viserys were smuggled away from Dragonstone because Robert Baratheon was searching for them.

In Season 1, Eddard Stark sent Stannis a letter while he was in Dragonstone, revealing that Cersei’s children were born of incest, making Stannis the true heir to the throne. In Season 2, Stannis converted to the religion of the Lord of Light, at Melisandre’s influence. Melisandre stayed at Dragonstone, burning statues of the Seven-faced God as an offering to the Lord of Light.

HBOMelisandre and others at Dragonstone.

Davos eventually joined them at Dragonstone. Stannis retreated back here after his defeat at the Battle of Blackwater.

The last time we saw Gendry was in Season 3, when he was being held at Dragonstone by Melisandre for blood leaching. Davos freed Gendry and sent him to King’s Landing on a rowboat. However, it’s not known if he actually made it there.

In Season 4, Stannis left Dragonstone to help the Night’s Watch at the Battle of Castle Black.

It’s not completely clear who controls Dragonstone now. After Stannis left and was subsequently killed by Brienne, it may have reverted to the crown, which is currently House Lannister. Or there may still be people there who are loyal to Stannis. 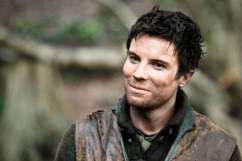 Gendry on ‘Game of Thrones’: A Storyline Recap

Read More
Game Of Thrones, HBO, Television, TV
Learn the history of Dragonstone, when it's been referenced on the show before, and see photos.