George A. Romero died on Sunday, and the cinema world is reeling from its loss. The filmmaker, also known as “The Godfather of the Dead,” helped pioneer the zombie genre during his six-decade career, with classics like Night of the Living Dead (1968), Dawn of the Dead (1978), and its subsequent sequels. He was 77.

Romero is survived by his wife and three children: Cameron, Andrew and Tina, the latter of whom was with him at the time of his death. To learn more about them, and whether they’ve followed in their father’s footsteps, here are five fast facts you need to know.

1. His Son Cameron George Romero is a Filmmaker

Romero’s eldest son, Cameron George Romero, was born in Pittsburgh, Pennsylvania. He attended Thiel College in his youth, and spent his post-grad years moving around the country and working crew on various film sets. He eventually found his niche in creative marketing, according to his Facebook bio, and worked his way up to become the head of Batpack Studios in 2004.

During his time at Batpack Studios, Cameron’s Facebook reports that he helmed two feature films, developed over 50 creative online marketing strategies and campaigns for Fortune 500 companies, and directed over 100 commercials for companies like Verizon, Verizon Wireless, The Lending Tree, Cracker Barrel, and Sony Electronics.

On his personal info page, he pokes fun at the fact that he has to live in his father’s legendary shadow, writing “This page is about all things Romero… no, the younger one.”

2. His Daughter Tina Romero Also Works in the Film Industry

Tina Romero, like her brother and father before her, caught the artistic bug at an early age. She attended Wellesley College in Massachusettes, where she graduated with a degree in Cinema and Media Studies. She later worked as an adjunct professor at the School of Visuals Arts in New York, according to her Facebook page.

Professionally, Tina’s IMDb page shows her to be something of a jack of all trades. She served as the production designer on the short films The Visited (2009) and Bed’s Made and Sweater’s On (2012), an art director on the short films Annie’s Wake (2010) and Deadbeat (2013), and a camera technician on the short films Linus (2007) and All Her Notebooks (2013).

In an interview with BKMag in 2015, pop duo Shirley House revealed that Tina also directed the music video for their single “Carry On.” Shirley House said “[It’s] a song about desperation and survival, and so it’s especially fitting that Tina Romero, daughter of legendary horror film director George A. Romero, directed the video with filmmaker Emily Ray Reese.” On her Facebook and Linkedln accounts, Tina lists that she also works as DJ in New York.

3. All Three Children Have Had Cameos in His Movies

Filmmaking was a family affair for George A. Romero. He constantly cast himself and his friends in his films, and his children were no different. Cameron made an uncredited appearance in the 1993 film The Dark Half, where he played a customer at a gas station. Romero would subsequently take seven years to release his next film Bruiser (2000), but when he did, he made sure to include as many appearances from his children as possible. Tina was cast as as a character named Cleopatra, while Romero’s son Andrew appeared as a character named Little Devil.

In total, Tina Romero would up with the most screentime in her father’s films. She appeared in the 1988 cult classic Monkey Shines (as “Child Playing”) and had a much more substantial role as the “High Noon Soldier” in Land of the Dead (2005), Romero’s return to the Living Dead franchise.

4. Cameron Is Attempting to Make a Prequel to ‘Night of the Living Dead’

Video Update – ROMERO'S ORIGINS!Thank you for all your continued support. Let's help tell the Origin together. http://www.helptelltheorigin.com2014-10-21T20:48:23.000Z

In 2014, Cameron Romero launched an Indiegogo campaign to make a prequel to his father’s landmark film Night of the Living Dead (1968). Titled Origins, the film would be set at the height of the Cold War, when one scientist tried to give the world its best hope for survival and instead unleashed its worse nightmare.

“Origins is the story in the Romero universe of how the first ‘Zombie’ strolled across that cemetery and into lives of those in the ‘dead’ series almost fifty years later,” reads the Indiegogo description, “This is a project that will re-define the genre… as well as the monster and everything that scares you about them.” In a 2015 interview, Cameron elaborated on his vision, telling Variety “[It’s] is a great opportunity for me to continue the family tradition of creating haunting and ever-evolving depictions of the undead, and a great opportunity for Romero fans to see a story of zombie inception never portrayed before.”

So far, Cameron has raised $30,000 on the Indiegogo homepage. It is unclear whether Romero’s death will factor into the production of the film.

5. He Had His Children from Different Marriages

Romero was married three times during his life. He married costume designer Nancy Romero in 1971, after they had met during the production of his film Season of the Witch (1972). The couple divorced in 1978, and had no children together.

The director went on to marry actress Christine Forrest, whom he had met during the production of Dawn of the Dead (1978), where Forrest played both the TV producer and the mall announcer. They married in 1980, and had two children together, Tina and Andrew.

Like his children, Romero cast Forrest in a number of his films thereafter, including Monkey Shines, The Dark Half, and Bruiser. They divorced in 2010. Romero married a third and final time in 2011, and remained with Suzanne Desrocher until his death on Sunday. 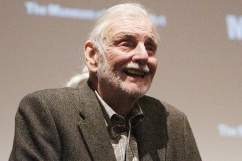 George A. Romero Cause of Death: How Did the Iconic Director Die?

Read More
Movies, Zombies
Filmmaker George A. Romero has died at the age of 77. Learn about his three children and their place in the movie business here.