There’s no denying it: Harry Styles is one of the most sought after pop stars in the world. Whether the result of his One Direction past, his solo album, or his acclaimed performance in the WWII film Dunkirk, Styles is currently on top of the world. And it appears as though he has a new girlfriend…

According to The Sun, Styles is dating Victoria’s Secret model Camille Rowe. The two reportedly met through mutual friends, and are said to be in the early stages of their relationship.

Read on to learn who Rowe is and why she has the former 1D star so smitten.

1. Rowe Has Modeled for Magazines & Ad Campaigns Since 2008

Thank you for having me as the face of new campaign! ✨ @ippolitajewelry ? #paoloroversi #TheStyleofI #ippolita

Rowe, 27, was born in Paris, France to an American mother and a French father. She was spotted in 2008 in a café in Le Marais while studying at university, and asked to model for Dior Homme (along with Twilight actor Robert Pattinson). Since then, Rowe has modeled for major campaigns like H&M, Louis Vutton, Tommy Hillfiger, Abercrombie & Finch, and Victoria’s Secret. She has also appeared on the cover of Vogue Paris, Madame Figaro and Marie Claire.

In 2016, Rowe was named Playboy Playmate of the Month for April.

In an interview with L’Officiel in 2009, Rowe explained the cause of her success: “I seriously think it worked out for me because I’m kind. I’m a girl next door. OK, if you want, a girl next door pretty pretty.” She added that its important to keep things in perspective when fame comes knocking,” I would never understand the importance people place on this. Fashion is my job, not my life.”

Rowe has parlayed this notoriety in print and ad campaigns into various films and music videos. In 2010, she made her acting debut in the French thriller Our Day Will Come. Acting opposite Vincent Cassel, Rowe earned mixed to positive reviews for her performance.

You can watch the trailer for Our Day Will Come above.

In 2011, Rowe appeared in the music video for The Strokes‘ single “Call Me Back.” Two years later, she was cast as the lead in the MGMT music video for the song “Alien Days.” According to Who’s Dated Who, Rowe also dated the lead singer of MGMT, Andrew Vanwyngarden, from 2012 to 2014.

According to The Sun, Rowe is also said to have dated singer-songwriter Devendra Banhart around 2011. Neither party has addressed these rumors.

3. Styles Alluded to His Relationship With Rowe In an Interview Last Month

While it seemed innocent enough at the time, Styles’ interview on BBC 1 Radio now proves to be the hint that he was secretly dating Rowe. BBC host Nick Grimshaw played a game with Styles and had him play the “Heart Monitor Challenge”, which would prove whether or not the singer was telling the truth when asked various silly questions.

Grimshaw showed Styles a series of photos, including one of actor Ryan Gosling and one of Rowe. When shown Rowe, the singer grinned and said “I don’t know her. I’m sure she’s a wonderful person. I hate you all so much.”

The “Heart Monitor Challenge” went on to reveal that Styles is in awe of Gosling as an actor, and that he’s a big fan of Chelsea brand boots, but the biggest nugget to take away is definitely his coy response to Rowe. We now knew that he did in fact know who she was. Watch the full interview above.

4. Rowe is the 3rd Victoria’s Secret Model That Styles Has Dated

Styles has amassed a reputation for dating Victoria’s Secret models. In January 2015, Us magazine claimed that he was cozying up to Nadine Leopold. An insider claimed that the couple weren’t exclusive, but were nevertheless spending “lots of time together.”

There were even rumors, courtesy of Daily Mail, that Styles had gotten Leopold’s initials tattooed on his body. By June, however, things had fizzled out, and Styles had moved onto another model, Sara Sampaio.

Within a few months, the singer was caught hugging and kissing Sampaio before he went on tour with One Direction. “There was definitely chemistry there as they hugged and kissed each other when she left but everyone thinks something was up as she came back and they left so soon after each other the next morning,” said Daily Mail. The two were also seen wearing similar clothing the night before.

Styles and Sampaio’s relationship was quietly broken off before the end of the year.

5. Sources Say That Styles is ‘Very Protective’ of the Relationship

Merci for such a beautiful show @dior @mariagraziachiuri.official you made my eyes twinkle✨. I wish these pants would never leave my legs ?

The Sun reports that Styles and Rowe share a friend in fellow model Alexa Chung, and the trio recently went to a gig in New York together. A source close to the couple says “Harry and Camille are in the early stages of dating. He’s very protective of his relationships so isn’t going to want to make a big show of things.”

“They are well suited and seem happy,” adds the source. “She’s a real star on the rise. He seems besotted.” This will be Styles’ first relationship since his split from food blogger Tessa Ward earlier this year. To learn more about Ward, click below. 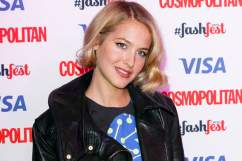