You’ve likely heard the rumors that some episodes in this season of Game of Thrones are going to be extra long in order to help make up for the much shorter season. It’s true, but unfortunately tonight is not going to be one of those episodes. The finale is reported to be extra long, clocking in at 81 minutes. But tonight’s won’t be anything special in terms of length.

According to the show’s TV listings, tonight’s episode will be a normal hour length. That means it will start at 9 p.m. Eastern and end at 10:00 p.m. Eastern.

Unfortunately, HBO doesn’t even list tonight’s episode as being 60 minutes long. It will be 59 minutes in length. So by the time you’re halfway through the episode, you’ll likely be thinking that it’s ending far too quickly.

The run times for the rest of the episodes in the season are as follows:

The longest episode so far has been the Season 6 finale, Winds of Winter, which clocked in for 68 minutes. So this season’s finale is going to blow that one out of the water, being 81 minutes long. Unfortunately, Episode 4 is going to be extra short, only clocking in at 50 minutes.

Things are looking up for Season 8. Although the season will only have six episodes, there have been some rumors that those episodes might be feature-movie-length.

While you’re waiting for the premiere to air tonight, check out some great ideas if you’re planning to throw a watch party tonight.

Then check out the stories below to prepare yourself for tonight’s episode. 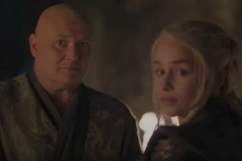