Getty Jared Leto in the flesh.

Jared Leto couldn’t physically be at San Diego Comic Con, but the actor/musician was still there virtually to help Warner Bros. introduce Blade Runner 2049. Since the studio released a trailer for the film just a few days ago, the virtual Leto was the big excitement from the Blade Runner 2049 part of the event.

Here’s photos from those in attendance of the strange scene:

Er, Jared Leto's turned up as a hologram for Blade Runner 2049 #SDCC pic.twitter.com/oAkZho1UdA

So a Jared Leto hologram dressed like a 70's wedding singer just presented the footage for #BladeRunner2049 #SDCC #HallH pic.twitter.com/s24QtaPIHe

Quite a few people on Twitter noticed that Leto looked like he just stepped out of the 1970s.

Hologram of Jared Leto with 1970s bangs and high waisted trousers? Sign me the fuck up! #HallH

SDCC is taking place after Warner Bros. released the second trailer for Blade Runner 2049 on July 17, so the studio won’t have a new trailer to show. Warner Bros. did show new footage, but they are not expected to release that online. You can check out the new trailer below. The film hits theaters on October 6.

Blade Runner 2049 is a sequel to the beloved 1982 Ridley Scott film that starred Harrison Ford as Blade Runner Deckard, whose job it was to stop replicants, androids that are more powerful than humans, but look just like flesh and blood humans. In the new film, LAPD Officer K (Ryan Gosling) finds a secret that leads him to a retired Deckard, played by Ford once again.

While Scott is a producer on the Alcon Entertainment film, Denis Villeneuve has taken over as director. Villeneuve is best known for helming Prisoners, Sicario and Arrival. He earned an Oscar nomination for directing Arrival, a science fiction film with Amy Adams, earlier this year.

Ford and Gosling were physically at SDCC though.

Leto also works for Warner Bros. as The Joker in the DC Extended Universe, but it’s not clear if he’ll really be back for another movie after playing Batman’s main villain in Suicide Squad.

“Talking about Joker [returning in Suicide Squad 2] is like talking about Fight Club… it’s the first rule. Unless you want to gargle your testicles, it’s probably better to leave it,” Leto told Entertainment Tonight Canada when asked if he’ll play the role again. 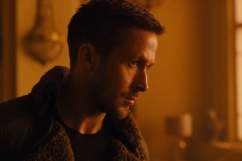