Jodie Whittaker is the new Doctor Who. According to Entertainment Weekly, the BBC announced the actress’ casting on Sunday morning after the Wimbledon Men’s Final. Whittaker will be taking over the famed role for its highly anticipated Christmas Special in December, taking over for current series star Peter Capaldi. She will be the 13th person to hold the title of the Doctor since the series first premiered in 1963.

“I’m beyond excited to begin this epic journey,” Whittaker said in her official statement, “With Chris [Chibnall] and with every Whovian on this planet. It’s more than an honor to play the Doctor.” To learn more about Whittaker, and her career, here are five fast facts you need to know.

1. She Graduated from the Guildhall School of Music & Drama in 2005

GettyJodie Whittaker speaks onstage at the “Broadchurch” panel on July 25, 2013.

Whittaker, born June 3rd, 1982, attended Shelley College in West Yorkshire, England. In an interview with the Yorkshire Post, she revealed that she wanted to spend a year traveling before she attended drama school. “My darling dad dropped me off at the airport – I think it was Heathrow,” she said, “And off I went. I didn’t turn a hair. What my parents must have thought about it all, I don’t know, they must have been worried sick.”

“But my mind was made up,” she added, “All my mates were going to university, and that wasn’t for me, so I decided that seeing other places, other cultures would broaden my mind a bit.”

When Whittaker returned to the UK, she decided to enroll at the prestigious Guildhall School of Music and Drama in London. “I’d visited London when I was younger, and I always sort of felt that it was the place I wanted to be,” she said. After graduating in 2005 with the coveted Gold Medal, she went straight into The Storm at Shakespeare’s Globe Theatre.

2. She Married Actor Christian Contreras in 2008

Jodie Whittaker attends a screening of “Hello Carter” on October 12, 2013.

In an interview with The Independent in 2011, Whittaker revealed that she met her husband (and fellow actor) Christian Contreras in Drama School. “I don’t really want to talk about relationships because it lets people into stuff,” she said, “I’m not on Facebook for that reason. I find it a bit odd that acting comes with people knowing things about you that sometimes only your best mates know. I find it strange that you’re expected to share it with millions of people you’ve never met.”

Despite her reluctance to discuss her personal life, Whittaker did discuss the happiness she felt when she married Contreras in 2009: “I’m married to Christian – have been for two years – a fact that is probably on Wikipedia anyway. And I’m not going to deny I’m married, I wear a bloody wedding ring after all. We had a big wedding in Arizona – very attention-seeking, big dress, big guest-list kind of wedding. It was obviously in my top five days…”

In 2015, the couple welcomed their first child. The child’s name has been kept private. Whittaker is very secretive of her private life, and she has no Instagram or Facebook accounts. In an interview with The Irish Times, it’s revealed that Whittaker had to ask Twitter to shut down a fake Jodie Whittaker account.

3. Her Most Notable Films Include ‘Venus’ & ‘Attack the Block’

Whittaker made her professional debut in The Storm at Shakespeare’s Globe in 2005. Since then, she’s appeared in film, television, radio, and theatre. She starred in a radio adaptation of Blinded by the Sun in 2008, and later appeared in the short film Wish 143 (2009), which was nominated for the Academy Award for Live Action Short Film at the 83rd Academy Awards. On television, she is known for her roles in Marchlands (2011), Broadchurch (2013-17), and The Assets (2014).

Whittaker’s notable films include Venus (2006), where she acted opposite Peter O’Toole and Vanessa Redgrave and was nominated for the ALFS Award for British Newcomer of the Year, St. Trinian’s (2007), and The Kid (2010). For international audiences, her most recognizable role is Samantha Adams in the science fiction thriller Attack the Block (2011). Digital Spy wrote that the film was “exactly the kind of distinctly homegrown product that the British film industry should be making.”

“I always wanted to be an actress, from as long back as I can remember,” she said, “It was finding out how that perplexed me. But, look, I am part of an amazing profession, I love my job – even if it is pretty scary at times, walking out on a stage or on a set and knowing that you could make yourself look a total imbecile.”

4. Her Nephew Harry Whittaker Acted in ‘Emmerdale’ Before His Death

Whittaker’s nephew Harry followed in her footsteps from an early age, playing the toddler in the BBC series Emmerdale. Harry was diagnosed with Down Syndrome as a baby, and Whittaker spoke on this in an interview with The Examiner.

“As proud aunty to Harry and Mencap ambassador it has been fantastic to be able to help raise awareness for people with learning disabilities. All we want is for Harry to grow up in a safe and unprejudiced society where people with Down syndrome or any learning disability is giving the support and care they need.”

Sadly, Harry passed away in 2014 at the age of 3. To honor him, the following episode of Emmerdale placed a photo of him during the credits with the message “To Harry, With Love.”

5. She Will Be the First Woman Ever to Play Doctor Who

Whittaker will be making history in December, as she will be the first woman ever to take the role of Doctor Who. “It means remembering everyone I used to be while stepping forward to embrace everything the Doctor stands for: hope,” she said in her statement, “I can’t wait.”

Whittaker continued, speaking on the tremendous weight that she shoulders as the new Doctor: “It feels completely overwhelming, as a feminist, as a woman, as an actor, as a human, as someone who wants to continually push themselves and challenge themselves, and not be boxed in by what you’re told you can and can’t be. It feels incredible… I want to tell the fans not to be scared by my gender. Because this is a really exciting time, and Doctor Who represents everything that’s exciting about change. The fans have lived through so many changes, and this is only a new, different one, not a fearful one.”

Showrunner and head writer Chris Chibnall elaborated on Whittaker’s casting in his own statement. “I always knew I wanted the Thirteenth Doctor to be a woman and we’re thrilled to have secured our number one choice,” he wrote, “Her audition for The Doctor simply blew us all away. Jodie is an in-demand, funny, inspiring, super-smart force of nature and will bring loads of wit, strength, and warmth to the role. The Thirteenth Doctor is on her way.” 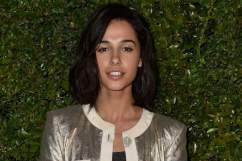