Tonight, Josh Levin will compete in the Los Angeles finals of American Ninja Warrior in the hopes of becoming the show’s next $1 million winner.

Full send footage from The Vice! ? Had to try hard on this one for sure. Can't wait for more South Africa bouldering! ?? #Rocklands
?S.Barth pic.twitter.com/CPGTCxYuJj

Levin is a professional rock climber from Sunnyvale, California.

Over the course of his illustrious rock climbing career, he’s accumulated 19 National Championships titles, 5 Continental Championships, many US speed climbing records, and a bronze medal at the 2008 Youth World Championships.

After graduating in 2012, he founded Fremont’s Climbing Appreciation Club, and at age 20, he competed at the Summer Youth Olympic Games in Nanjing, China.

According to Mercury News, he hopes to compete in the 2020 Tokyo Olympics in the climbing event.

2. He Is Currently Completing a Degree in Mechanical Engineering at Northeastern University

When he isn’t busy training, Josh is in school, earning a degree in Mechanical Engineering from Northeastern University.

It's that time of year again… ? Tune in tonight at 8pm to @NBC to catch the Season 9 premiere of #AmericanNinjaWarrior! pic.twitter.com/zj3PV0tnqS

In 2012, Levin received the North Face Young Gun Award, which is given to two athletes each year for “commitment to the sport and exemplary sportsmanlike conduct.”

Last year, Levin competed in the ANW spin-off series, Team Ninja Warrior. This year, he’s competing with his best friend, Charlie Andrews, who he’s known since he was 10 years old. Speaking to Mercury News recently, Levin explained, “Team Ninja Warrior was fun, and seeing people I look up to on TV, and now being able to interact with them and count them among my close friends, it’s a transition from fan to fellow athlete.” He trains five days a week–anywhere from four to give hours a day– to prep for the show. 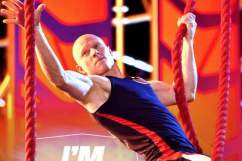 4. He Has Interned at NASA

Levin has interned at the NASA Jet Propulsion Laboratory as a member of the Mars 2020 Rover group.

Josh was also one of just five ninjas to clear the City Finals and advance to Stage Two of the show– he was joined by Drew Drechsel, Daniel Gil, Brian Arnold, and Jake Murray.