Getty Actress Barbara Bain (C) and daughters Juliet Landau (L) and Susie Landau-Finch attend the Los Angeles premiere of the Regent Entertainment film "The Hunting of the President" on July 20, 2004 in Westwood, California.

Martin Landau, who died on July 16 at the age of 89, left behind two daughters who both forged respected careers in Hollywood.

According to ABC News, Landau became famous through the 1960s TV show Mission: Impossible, and won an Oscar “for his poignant portrayal of aging horror movie star Bela Lugosi in 1994’s Ed Wood.”

His daughters are Juliet Landau and Susan Landau Finch.

1. Landau Had Both Daughters With His Former Wife, Barbara Bain

Landau was divorced from his wife, Barbara Bain, who is the mother of his two children.

Bain is an actress in her own right. According to IMDB, Bain originally “gained work as a dancer and high-fashion model.” She switched into acting.

IMDB reports, “She is probably best known for her work in the landmark television series Mission: Impossible (1966), created by Bruce Geller, where she created the pivotal role of Impossible Missions Force Agent Cinnamon Carter, and, in the process, became the first actress in the history of television to receive three consecutive Emmy Awards for Best Dramatic Actress.”

According to Senior City Local, Barbara Bain “began modeling with the Frances Gill Agency in 1955 and enrolled in acting classes with Curt Conway at Theater Studio.”

That’s where she met Martin Landau.

“She met Conway’s teaching assistant Martin Landau, and it was dislike at first sight. However, over a dinner party a few weeks later, a better relationship bloomed; Barbara Bain and Martin Landau got married in 1957,” the site reports.

2. Landau’s Daughter, Juliet, Is Also an Actress Who Co-Starred in Buffy the Vampire Slayer

Juliet Landau is also an actress in her own right.

According to IMDB, she “co-starred in Tim Burton’s highly acclaimed Ed Wood (1994) as Loretta King and starred opposite Whoopi Goldberg and Armin Mueller-Stahl in New Line Cinema’s Theodore Rex (1995) as Dr. Veronica Shade. She portrays Drusilla in the television dramas Buffy the Vampire Slayer (1997) and Angel (1999).”

Juliet Landau has a long history of starring in independent films as well as theater productions.

On her website, Juliet Landau writes: “Juliet Landau takes a bite out of vampire genre with Joss Whedon, Tim Burton, Gary Oldman, Willem Dafoe, Robert Patrick, Anne Rice and many more! Juliet, who played Drusilla on BUFFY THE VAMPIRE SLAYER and ANGEL, has launched an Indiegogo campaign for her new project A PLACE AMONG THE UNDEAD!!”

What is that? The website says it’s a “first of its kind” in many ways. “It is fast becoming the most definitive vampire documentary. It gathers the Who’s Who of the genre, never seen before together in one film. It also provides a rare perspective… It’s an insiders’ view into the vampire phenomenon,” says the site.

The website says that Juliet Landau is married. “Juliet and her husband Dev were self-funding the project, but it has grown beyond all expectations. Legions of the undead who want to be interviewed are multiplying daily! They are rising from the catacombs of Transylvania to the lovelorn halls of High School,” the website says.

Martin Landau with his two daughters.

Landau’s other daughter, Susan Landau Finch, is also involved in Hollywood, but she’s forged her career behind the camera.

She is sometimes called Susie.

Susan Finch is “a producer-writer-director with a background in film and theater production. She has worked extensively for American Zoetrope in all aspects of film production under the aegis of Francis Ford Coppola’s Los Angeles and San Francisco studios among others,” IMDB reported.

4. Landau Died of ‘Unexpected Complications’ During a Hospital Stay

The star died on Sunday July 16 after “unexpected complications” arose “during a short stay at UCLA Medical Center,” his publicist told ABC News.

You can learn more about the actor’s death here: 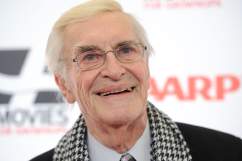 Martin Landau Cause of Death: How Did The Oscar-Winning Actor Die?

GettyActor Martin Landau arrives at the Netflix FYSee Kick Off Event at Netflix FYSee Space on May 7, 2017 in Beverly Hills, California.

Landau was a household name but a respected actor nominated three times for Academy Awards and five times for the Emmy Award, according to Daily Variety.

Variety reports that some of his other prominent roles included Tucker: The Man and His Dream, “which brought Landau the first of three supporting noms,” and his “turn as a successful Jewish ophthalmologist haunted by a secret in Woody Allen’s drama Crimes and Misdemeanors.”

Landau got his first big break in Alfred Hitchcock’s North by Northwest, “playing the villain who does Mason’s dirty work,” reported Variety.