Justin Bieber is currently single, according to the website Who’s Dated Who. Since his split from Selena Gomez in 2016, Bieber has been linked by the media to a variety of women from reality star Kourtney Kardashian to actress Hailee Steinfeld. However, Bieber has not been serious with any one woman in particular in quite some time.

On Sunday night, the Biebs posted a new photo on Instagram — and his fans went crazy. The photo (seen below) shows a shirtless Bieber walking alongside a mystery brunette. Bieber did not add a caption to the photo, nor was there anything to suggest that he and the girl were a romantic item, but fans automatically assumed that the girl in the photo had to be Bieber’s new love interest.

Fans have been desperate to find out who Bieber’s new gal pal is and whether or not the two are romantically involved. The most recent girl that Bieber has been linked to is Gabriella Lenzi, a 23-year-old Brazilian model. The girl in the picture could be Lenzi, but she doesn’t look exactly like her. She does have long, dark hair, but it’s hard to connect any other dots as the girl in the photo is looking down and the angle isn’t great. Take a look at the photos of Lenzi below.

Other fans seem to think that the girl isn’t anyone close to Bieber but, rather, she is a photographer or a makeup artist that is working with him on a shoot. It’s entirely possible that the Biebs posted the photo just to stir the pot. Since there isn’t any hand holding or anything else that suggests the two are dating, there’s a good chance that they are just working together — or that they are just friends.

Over the past several weeks, the only woman to grace Bieber’s Instagram account has been his mother. 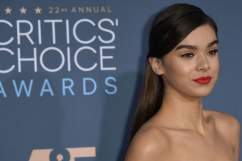