The month of July has seen some fairly serious scandals involving various celebrities. Now, Twitter seems to think that rapper Kanye West may have predicted these things in his 2005 hit single, “Gold Digger.”

You can listen to the song below.

Here’s a look at what’s gone down and what lyrics from “Gold Digger” fans are associating with these recent scandals.

The youngest member of the Kardashian family went on a social media tirade earlier this month, slamming his ex-fiancee, Blac Chyna. Kardashian posted some nude photos of his ex, accused her of cheating on him, and went on to talk about how much money he has spent on her — including $100,000 for her to have plastic surgery after giving birth to their daughter, Dream.

“She take my money when I’m in need, Yeah she’s a trifling friend indeed… My psychic told me she have an ass like Serena… She got one of your kids, got you for 18 years…His baby mamma car and crib is bigger than his… She went to the doctor got lipo with your money.”

Next up is R. Kelly. Earlier this week, the rapper was accused of running some sort of bizarre sex cult. The initial report was put on into the world by Buzzfeed. The site made bold claims that R. Kelly had been controlling the lives of these women for several years. He was accused of having several women living in his guest house in Georgia.

It wasn’t long before R. Kelly’s rep denied the claims.

“Mr. Robert Kelly is both alarmed and disturbed by the recent revelations attributed to him. Mr. Kelly unequivocally denies such accusations and will work diligently and forcibly to pursue his accusers and clear his name,” his rep told TMZ.

“OK get your kids but then they got their friends. I pulled up in the Benz, they all got up in.”

Reports that comedian Kevin Hart has been cheating on his pregnant wife hit the internet on Wednesday. Radar Online posted a few photos of a man that looked like Hart in a Lexus sedan with a mystery woman. The site claimed that Hart was canoodling with this woman after hanging out with her at Liv Nightclub in Miami in the early morning hours of July 3.

Hart didn’t directly respond to the report, but he did post a photo of himself laughing on Instagram and added the caption, “#LiveLaughLove SMDH.”

“So, stick by his side. I know this dude’s balling but yeah that’s nice. And they gone keep calling and trying. But you stay right girl. And when you get on he leave your ass for a white girl.”

Usher found himself in the tabloids on Wednesday, July 19, when Radar Online published a story about him. A woman by the name of Maya Fox Davis has accused the singer of giving her herpes back in 2012 when she says the two hooked up. Davis claims that Usher didn’t tell her that she had an STD. The report indicates that Usher quietly settled a lawsuit filed by Davis.

“My best friend says she use to f— with Usher… I don’t care what none of y’all say I still love her.” 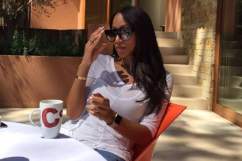