Lily James stars in the film Baby Driver which was released on June 28, 2017. The actress, who also starred as Cinderella in the Disney live-action remake back in 2015, is currently dating Matt Smith, a British actor known for his role as The Doctor in Doctor Who.

The couple has been dating since 2014. Just last month, engagement rumors about the couple circulated after the two were spotted “shopping for rings.” According to the Daily Mail, James attended the launch party of diamond specialist De Beers at Harrods in London, where she was placing different baubles on her hand, giving them a go.

While she tried on a variety of different rings — including a 71-carat canary-colored solitaire — James said that she fell in love with something else, something a bit more understated. It was a 9.1 carat oval cut diamond, which was worth a little over $250,000.

“This is the diamond that has found its way to my finger. It’s very unique. I would definitely want something like this,” she told the Daily Mail.

And while the two aren’t engaged just yet, they might be getting close. According to The Sun, James and Smith stayed at a Palm Springs hotel after the premiere of Baby Driver in Los Angeles. Sources told the publication that James was heard talking to Smith about the hotel and how it would be the “perfect place” to have a wedding.

GettyLily James and Matt Smith at the MET Gala.

“We’re not engaged yet. But it’s going very well,” James recently told The Sun, clearing up any engagement rumors. The couple lives together in London and has been seen locking lips all over town for the past couple of years. Back in May, the lovebirds attended the MET Gala together. According to Just Jared, James wore a white corseted gown by Burberry, her beau following suit in a Burberry tuxedo. This was one of the first and only times the couple walked a red carpet together. 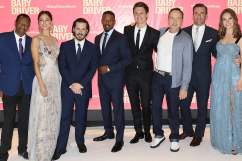 ‘Baby Driver’ Spoilers: Is There an End Credits Scene?