Blue Ivy has become a Twitter trend, perhaps stealing the thunder away from her new twin siblings. While just about everyone is waiting for Beyonce and JAY-Z to officially announce the birth of their twins, confirm their names (rumored to be Rumi and Sir), and share their very first photos, the world has shifted its focus to the couple’s 5-year-old daughter, Blue Ivy.

Blue is featured on a bonus track on her dad’s new album, 4:44. The song is called “Blue’s Freestyle/We Family.”

According to XXL Magazine, JAY-Z released 4:44 on iTunes and Apple Music on Thursday, July 6. It is also available on Amazon Music Unlimited. The album was released on Tidal last week. Several rumors circulated after 4:44 was released online and one of those rumors was that the album would include a couple of bonus tracks. It turns out, those rumors were true.

The full track listing for 4:44 is as follows:

According to XXL Magazine, the album is already “certified platinum.”

“The album has been certified platinum in less than a week even though it was illegally downloaded nearly a million times. How did Jay do it? He got Sprint to buy a million copies, the same way Samsung “bought” a million copies of Magna Carta Holy Grail four years ago.”

Blue Ivy, 5, made her singing debut on her dad’s previously released song, “Glory.” In the song, Blue’s baby babble can be heard clearly at the end of the track. You can listen to “Glory” below. 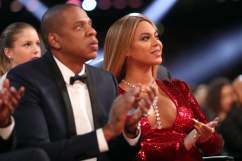