Ozark | Official Trailer [HD] | NetflixOzark: Their Last Resort. The Byrdes, husband and wife Marty (Jason Bateman) and Wendy (Laura Linney), their teenage kids Charlotte (Sofia Hublitz) and Jonah (Skylar Gaertner) — are for all intents and purposes an ordinary family. Ordinary save for Marty’s job: The top money launderer for the second largest drug cartel in Mexico. Now streaming, only on Netflix. Watch Ozark on Netflix: https://www.netflix.com/title/80117552 SUBSCRIBE: http://bit.ly/29qBUt7 About Netflix: Netflix is the world's leading internet entertainment service with 130 million memberships in over 190 countries enjoying TV series, documentaries and feature films across a wide variety of genres and languages. Members can watch as much as they want, anytime, anywhere, on any internet-connected screen. Members can play, pause and resume watching, all without commercials or commitments. Connect with Netflix Online: Visit Netflix WEBSITE: http://nflx.it/29BcWb5 Like Netflix on FACEBOOK: http://bit.ly/29kkAtN Follow Netflix on TWITTER: http://bit.ly/29gswqd Follow Netflix on INSTAGRAM: http://bit.ly/29oO4UP Follow Netflix on TUMBLR: http://bit.ly/29kkemT Ozark | Official Trailer [HD] | Netflix http://youtube.com/netflix2017-07-12T17:21:01.000Z

The show has received positive reviews from critics thus far, with Vulture describing it as a crime-drama that’s somewhere between Bloodline and Breaking Bad, and the New York Times dubbing it a “bloody mystery thriller, layered with darkly comic ganache”.

The series follows Marty Byrde (played by Bateman), a Chicago money manager who’s been delving into the world of money laundering for a Mexican drug boss. Byrde decides to uproot his life– which means the life of his wife, Wendy, played by Laura Linney, too– to the Lake of the Ozarks, where his business could potentially flourish.

Read on to find out how and when to watch the show.

The show’s star, Jason Bateman, started acting in the 1980s on Little House on the Prairie. In the 2000s, he became known for his roles on Arrested Development, for which he received a Golden Globe Award.

Bateman has starred in films like Juno, Hancock, Up in the Air, The Switch, and Horrible Bosses, among others. In 2001, he married Amanda Anka, the daughter of Paul Anka. Together, the couple has two daughters. 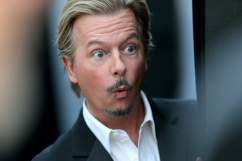 David Spade Relationship Status: Who Is the Actor Dating?

Read More
Netflix, TV
When does Ozark premiere on Netflix? When can you watch it, and when does it become available? Get the details here.