Pilot Jones, a singer who was previously entangled in the Blac Chyna and Rob Kardashian dating drama, may be ready to leap to Rob Kardashian’s defense.

In case you missed it, Rob Kardashian went on an epic Instagram and Twitter rampage against Chyna, the mother of his daughter, Dream. His Instagram account was suspended after he posted naked photos of Chyna and accused her of serial cheating, among other alleged offenses.

1. Blac Chyna Was Previously Accused of Cheating on Rob Kardashian With Pilot Jones

So I show up to clean your pool in these @mrturk #trunks …. what you doing? ???‍♂️ || ?: @iamdttinsley – – – #swimwear #swimsuit #4thofjuly #fashion #style #abs #menstyle #mensstyle #menfashion #mensfashion #pool #poolparty #merica

Pilot Jones is on the long list of men whom Blac Chyna is accused of seeing behind Rob Kardashian’s back. However, the allegations date to 2016, and she adamantly denied them.

According to Radar Online, Pilot Jones and Blac Chyna were allegedly “first caught hanging out late night in early 2016, and were spotted again together partying in March – long after Chyna, 29, hooked up with Kardashian.”

Photos of the pair hit the Internet, and Jones was said to be contemplating requesting a DNA test for Dream Kardashian, according to Radar Online.

According to TMZ, Pilot Jones has a reason to pile on to the controversy: He’s filming his own reality show in Miami called A-List: Miami.

“It’s been filming for a few months and we’re told he goes into great detail about their relationship … mostly how Chyna used him to goose her TV show with Rob,” reports TMZ.

3. Blac Chyna Accused Pilot Jones of Trying to Extort Her

I'm going to make you forget about everyone before me & treat you like the amazing soul you are! When a real man holds you down, you're supposed to drown! #husbandgoals || ?: @iamdttinsley – – – #menstyle #mensstyle #menfashion #mensfashion #fashion #Style #mrturk #mrturksuitsyou #streetstyle #menstreetstyle #pilotjones #redcarpet #blackmen #blackman #beardedman #beardgang #beardedmen #blackbeardedmen #hermes

Chyna claimed that Jones was trying to extort her, which Jones denied, reported Radar Online. In 2016, Radar Online reported that Chyna and Kardashian were accused of sending graphic text messages to Jones.

According to TMZ, police were investigating the text messages, some of which Jones considered threatening; the entertainment site reported that Rob sent Jones a text that read, “Leave my wife alone. I’m not playing with you.” TMZ reported in 2016 that Blac Chyna denied sleeping with Jones and alleged he was just trying to promote his music.

Kardashian was accused of sending Jones a string of racist and homophobic texts after a photo emerged of Chyna and Jones kissing. Chyna alleged the photos were years old and were taken to help Jones make someone else jealous.

She also posted Instagram screenshots of her conversations with Jones. You can read them here, as well as Kardashian’s alleged texts to Jones, but be aware they are extremely graphic.

According to his website, Pilot Jones is a singer who is trying to break into music. You can listen to his tracks here.

He is a father of two sons, about whom he’s posted on Instagram.

Jones previously appeared on the television show, Glee, according to RadarOnline.

Kardashian also posted a stream of tweets about Blac.

She has responded in a strange Instagram video of her own. You can learn more about that here: 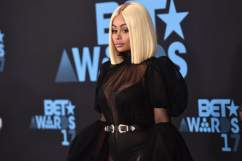