Getty Rob Kardashian and Blac Chyna at the Hard Rock Cafe on May 10, 2016 in Hollywood, California.

Kardashian’s sexually explicit photos of Chyna’s private parts, were deleted by Instagram within minutes of being posted, but he posted them again. This resulted in his Instagram account being shut down. Kardashian responded by tweeting out “Since Instagram shut me down everyone peep my Twitter lol.”

What followed was a reposting of all the photos of Chyna, as well as a video that she allegedly sent him while she was cuddling with another man. Kardashian then brought their daughter Dream into the conversation, claiming that Chyna had the child “out of spite” and that she her behavior is “just sad.

“My bed that my child lays in and she gave the robes I got to all her dudes in my house that I pay for,” he wrote, “Just sad. Loved Chyna as my wife and accepted all the wrong she did and continued to ride for her and remain Loyal to her. Never did I cheat.” This directly addresses the rumors that Chyna has cheated on Kardashian with a number of different men over the years, including her former boyfriend Pilot Jones. According to Radar Online, the two were hooking up behind Kardashian’s back this past January.

“But she couldn’t remain loyal and cheated and f**ked way too many people and she got caught and now this is all happening and it’s said,” he added, “We had a beautiful baby girl that was the best thing that’s happened to me and soon as that baby was born Chyna was out.”

Kardashian and Chyna gave birth to their daughter Dream Renée Kardashian in November 2016. She is currently seven months old.

Kardashian seemingly saves the biggest insult for last, however, tweeting that “Soon as kylie and tyga broke up Chyna was over the game. She had a baby out of spite and I’ll never view her the same.” This is in reference to rapper Tyga, who had a son with Blac Chyna before dating Kardashian’s younger sister Kylie Jenner.

“I truly thought Chyna wanted to be a family and that’s why I was so loyal to her but I learned my lesson and everyone else was right.” Check out the original tweet below: 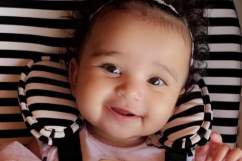