After over 20 years, Rocko’s Modern Life is making a return to the TV screen.

The popular 90s cartoon will return to Nickelodeon in 2018 with a one-hour special, titled Rocko’s Modern Life: Static Cling, that picks up right where the characters left off when it went off the air in November 1996. The TV movie will center around how the cast of characters has to adjust to life in 2017.

In the film, Rocko isn’t having the best go at getting used to modern-day culture.

“Heffer and Filburt embrace every aspect of new technology, social media and the endless diversity of food trucks,” a press release from Nickelodeon said. “Rocko whole-heartedly believes his nostalgia for the past can save him from the tortures of the modern world.”

Nickelodeon, in conjunction with Comic-Con, unveiled a sneak-peek at the upcoming special. Watch the teaser of the new Rocko’s Modern Life in the video below:

While the show will have a little different feel to it, the entire cast are back for the movie as well as the show’s creator, Joe Murray, albeit as an executive producer.

According to the press release, the short-length movie starts with the characters coming back down to Earth after being lost in space since the show’s conclusion. Here’s a full description of the plot.

Rocko’s Modern Life: Static Cling brings the characters back to Earth after being lost in outer space since 1996. Rocko has trouble accepting this 21st century modern life, while Heffer and Filburt embrace every aspect of new technology, social media and the endless diversity of food trucks. Rocko whole-heartedly believes that his nostalgia for the past can save him from the tortures of the modern world.

The rebooted cartoon is one of list of 90s classics that are making a return to TV. Earlier this year, Nickelodeon announced that Hey Arnold! The Movie would premiere this fall. Invader Zim will also come back with a TV special. 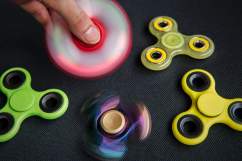 Read More
Cartoons, Nickelodeon
The first footage of the rebooted "Rocko's Modern Life" was debuted by Nickelodeon on July 20. Watch the teaser trailer for the show.