Sam Shepard has died. The celebrated writer and actor, once hailed as “the greatest American playwright of his generation,” was 73.

Among his most popular works are the play Buried Child (1979), which won him a Pulitzer Prize, and the films The Notebook (2004), Mud (2012), and The Right Stuff (1983), the latter of which earned him an Academy Award nomination for Best Supporting Actor.

Shepard, who was single at the time of his death, is survived by three children and his ex-wife, O-Lan Jones, whom he was married to from 1969 to 1984.

Here’s what you need to know about his relationship with Jones:

Shepard met Johnny Dark in 1967, when the latter approached him and asked what drug Shepard was on when he wrote his play Forensic and the Navigators. After that, the duo become lifelong friends, as evidenced by the book Two Prospectors: The Letters of Sam Shepard and Johnny Dark, and the documentary Shepard & Dark (watch the trailer above).

It was Dark who introduced Shepard to O-Lan Jones, an aspiring actress who was his stepdaughter at the time. The couple dated for little more than a year, according to Who’s Dated Who, and were married on November 9th, 1969. Jones was 19.

Jones’ unorthodox first name comes from the heroine of the novel The Good Earth by Pearl S. Buck.

2. She Collaborated With Shepard On Numerous Stage Plays

Jones dropped out of high school as a teenager, and spent most of her years before meeting Shepard appearing in off-off-Broadway productions. After she and Shepard got married, however, both of their careers began to improve. Jones scored her first success as a character in Shepard’s 1968 production Forensic and the Navigators.

According to TCM, Jones also appeared in numerous non-Shepard productions like The Death and Life of Jesse James, written by Len Jenkin, and The Birthday Party, written by Harold Pinter.

Jones and Shepard had one child during their marriage, Jesse Mojo Shepard. According to the Sam Shepard website, Jesse was named after famed outlaw Jesse James. Like both of his parents, Jesse pursued a career in the arts, particularly writing, and published his first book in 2003.

Titled Jubilee King, the book received positive reviews from critics, many of whom compared him to his father. “There is a similar stubborn realism in his son’s writing,” said The San Francisco Chronicle, “Along with crisply bitten-off language and deadpan humor.”

Jesse has two half-siblings, Hannah Jane Shepard and Samuel Walker Shepard, both of whom his father had after he divorced Jones. Hannah and Samuel’s mother is actress Jessica Lange.

4. She Has Appeared in Several Hollywood Films & Television Shows

Though her marriage to Shepard came to an end in 1984, Jones continues to find success in Hollywood. She made her screen debut in the television flick A Death in Canaan (1978), and has since appeared in a number of beloved and classic films, including The Right Stuff (1983), Married to the Mob (1988), Pacific Heights (1990), Natural Born Killers (1994) and The Truman Show (1998).

Jones has also appeared on televisions shows like Seinfeld and The X-Files, but her most prominent collaborator onscreen has been director Tim Burton, who cast her in Edward Scissorhands (1990), Mars Attacks! (1996), and most recently, Miss Peregrine’s Home for Peculiar Children (2016).

In a 2010 interview with Movie Dearest, Jones discussed the process of working with such acclaimed filmmakers. “Tim Burton’s fantastic,” she said, “The most important thing I’ve learned from him is his amazing intuition. There is something very inspiring about how he uses his intuition.

She also spoke on The Truman Show director Peter Weir, saying “[Weir] was great at creating and maintaining the atmosphere. He also respected each member of the cast, including the extras, and had expectations of all of us. That impressed me, how he included everybody in the process.”

5. She is Founder & Artistic Director of Overtone Industries

Jones and her best friend/writing partner Kathleen Cramer founded Overtone Industries in 1979. On Jones’ website, Overtone is described as “an innovative group of composers, writers and performers who have been exploring new music theatre for over 20 years. Their work has been performed in S.F., L.A., and in New York at the Kurt Weill Recital Hall in Carnegie Hall.”

One publication wrote that “Jones has, in fact, done as much to advance the cause of singing plays as Leonard Bernstein.”

When asked about Overtone, Jones told The Los Angeles Times “We’ve always wanted to be funny and deep and to look at the unseen things.” When asked about Shepard, who had an affair with singer Patti Smith during their marriage, Jones stated that they did not keep in touch: “My ego just gets so rubbed the wrong way and slurred by other people’s projections.”

Jones has been married to photographer and editor Halldor Enard since 2003. “Standing next to him is like being at the spa,” she says. 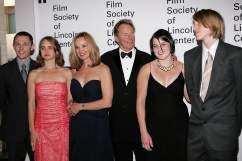