Shawn Henry is a former FBI official and cybersecurity expert featured in the History Channel’s new documentary Amelia Earhart: The Lost Evidence. In the two-hour documentary, which debuted on July 9 at 9 p.m. ET, Henry suggests that a recently discovered photo in the National Archives shows Amelia Earhart alive on an atoll in the Marshall Islands, along with her navigator, Captain Fred Noonan.

Earhart famously went missing in the Pacific Ocean during an attempt to circumnavigate the globe in July 1937. If the buzz around Henry’s “discovery” proves anything, it’s that there is still interest in Earhart’s disappearance 80 years after the fact.

Here’s a look at Henry’s claims and his career.

U.S. National Archives, Records of the Office of Naval Intelligence, Record Group 38, Monograph Files Relating to the Pacific Ocean Area, NAID 68141661This is the photo at the center of History Channel’s new Amelia Earhart documentary.

The above photo is the image at the center of The Lost Evidence. According to Henry, the undoctored photo appears to show a woman with her back to the camera who looks like Earhart. One of the men to her side looks like Noonan.

In an interview with NBC News, Henry says he’s confident that the photo shows Earhart. The History Channel shows other independent investigators also looking at the photo, using various tests that appear to show she is there.

“When you pull out, and when you see the analysis that’s been done, I think it leaves no doubt to the viewers that that’s Amelia Earhart and Fred Noonan,” Henry told NBC News.

It’s believed that Earhart and Noonan died in a crash sometime after they were last heard from on July 2, 1937. Their bidies were never found. Earhart was trying to become the first woman pilot to circumnavigate the globe. If she ended up near the Marshall Islands and survived, Earhart and Noonan were blown off course significantly.

The investigators in The Lost Evidence also suggest that the photo was taken by a U.S. spy who was watching the Japanese military in the Pacific. The two-hour special also features other evidence they believe show Earhart might have survived or was captured by the Japanese and the U.S. government covered it up.

“The hairline is the most distinctive characteristic,” Ken Gibson, a facial recognition expert, told NBC News of the man who could be Noonan. “It’s a very sharp receding hairline. The nose is very prominent.” 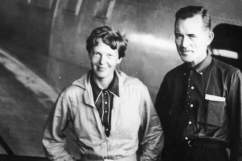 ‘Amelia Earhart: The Lost Evidence’: What Time Does the History Channel Special Start?

2. Other Investigators Have Cast Doubt on the Photo, Which Has no Date on It

Other investigators aren’t so confident in the photo. Unnamed investigators hired by the Daily Mail told the paper that the photo was likely taken after 1940, three years after Earhart was last heard from.

“Our archivists have looked at all the materials filed with the photo in question and found no additional information about the photograph other than the caption that was marked on the image,” Pritchett said.

The photo has a mysterious caption, which reads, “PL – MARSHALL ISLANDS, JALUIT ATOLL, JALUIT ISLAND. ONI # 14381 JALUIT HARBOR.” The back is also marked “confidential,” which suggests that the photo has an unknown link to the U.S. military.

“Other items in the box of records from the Office of Naval Intelligence included other images related to a geographic study of the Marshall Islands area and textual records related to the survey,” Pritchett told Gizmodo of the box the photo was found in.

The Daily Mail’s investigator could also be wrong. A Japanese blogger who goes by the name “@baron_yamaneko” claims that he has evidence that the photo was taken in 1935 and appeared in a photo book in Palau, which was under Japanese control at the time. You can even find the photo book in an online digital Japanese archive. And on Twitter, the blogger said the ship in the photo is the Koshu, a German ship the Japanese captured during World War I. The blogger claims it took him just 30 minutes to find the photo.

The History Channel told NPR that it has “a team of investigators exploring the latest developments about Amelia Earhart and we will be transparent in our findings,” adding, “Ultimately historical accuracy is most important to us and our viewers.”

In December 1987, Henry joined the Federal Bureau of Investigation and was an executive assistant director. For 24 years, he focused on cyber investigations worldwide. He also worked with the FBI International Operations and Critical Incident Response.

Henry retired from the FBI in 2012, ABC News reported at the time. During his time at the FBI, he helped establish the National Cyber Investigative Joint Task Force (NCIJTF).

“I believe the cyber threat is an existential one, meaning that a major cyber attack could potentially wipe out whole companies. It could shut down our electric grid or water supply. It could cause serious damage to parts of our cities, and ultimately even kill people,” Henry said in 2011, notes ABC News. “While it may sound alarmist, the threat is incredibly real, and intrusions into corporate networks, personal computers, and government systems are occurring every single day by the thousands.”

4. He Is Now President & CSO of Cybersecurity Firm CrowdStrike

Today, Henry is the president of CrowdStrike Services and its Chief Security Officer. At the firm, he leads investigative teams on computer network breaches.

“CrowdStrike provides professional Services to organizations to help them prevent and mitigate the theft of their most sensitive information by nation- state actors and others. Changing the security paradigm…by helping organizations use intelligence, be more proactive, and implement strategy into their network security,” reads a statement on Henry’s LinkedIn page.

It’s easy to see why CrowdStrike wanted to hire Henry, since he oversaw the FBI’s success in taking down hackers affiliated with LulzSec, Anonymous and other groups. However, he warned that the U.S. government was still losing to hackers in a 2012 interview with the Daily Beast.

“We have had a lot of success with cybercrime investigations. We’ve made arrests, we’ve had some impact,” Henry told the Daily Beast. “That said, we are not winning. Even though we’ve had success, the offense outpaces the defense and the problem is getting bigger.”

Henry explained that tracing a hacker’s computer isn’t as hard as getting the person who used it.

“I think there are a lot of investigative techniques the FBI has used over the last few years that have allowed it to infiltrate these organizations, to use intelligence to better identify who the players are within the organization, to get a full scope and understanding of the infrastructure of the organization,” Henry said. “And those capabilities … have allowed us to be more successful.”

Henry’s other current job is as an analyst and contributor to NBC News and MSNBC, based in Washington D.C. He focuses on cybersecurity and National Security topics. He has appeared on the Today Show, NBC Nightly News and other programs. Before NBC News hired him, Henry appeared on other shows, including ABC’s Good Morning America and CBS Evening News.

“They are interested in anything that is going to demonstrate and dictate the direction that the U.S. is going,” Henry told NBC last fall. “It is a whole-cloth collection across the U.S. and how they can use that information in negotiations. If you know the answer before the test you are in a stronger position.”