It’s a Bacon family affair on Lifetime tonight, with the debut of Story of a Girl. The film stars Sosie Bacon and her father, Kevin Bacon, and also marks the directing debut of her mother, actress Kyra Sedgwick. Story of a Girl is based on the novel by Sara Zarr and debuts on Sunday, July 23, 2017 at 8:00 p.m. ET. Read on to meet the cast and find out when it will be airing again.

In Story of Girl, Ryann Shane stars as Deanna, a girl whose life was changed when she was 13 years old by a sex video with an older boy, Tommy (Tyler Johnson), that went viral. Three years later, she’s still dealing with it and has even been called the “school slut.” The film and Zarr’s novel track Deanna’s attempts to move on from a past she can’t seem to escape. It doesn’t help that her father remains bitter and angry over her mistake.

Sosie Bacon stars as Stacey. In the book, Stacey is the Deanna’s brother’s girlfriend, who got pregnant at 18 and was kicked out of her house by her mother. She is also friends with Deanna.

Story marks the directing debut of Sedgwick, who is best known for her Emmy and Golden Globe-winning role on TNT’s The Closer. It was adapted by Laurie Collyer and Emily Bickford Lansbury.

In a interview with her daughter for Glamour, Sedgwick said she insisted that many of the people who worked with her on the film were women. She explained:

I worked really hard to have the heads of most of the departments be female, and it made a huge difference. Having a female director at the helm makes a difference as well. To me, a female energy means people being kinder, gentler, quieter, working more collaboratively, being very respectful to each other. I tried to make everyone feel seen and understood and appreciated. All humans need love, attention, and appreciation, and those can be very female traits. I feel like they should be male and female traits, but I think that they are more easily attributed to women.

Now, it’s time to meet the cast of Story of a Girl.

Ryann Shane is the star of Story of a Girl, playing Deanna, a girl struggling to escape the one misdeed that has defined her life – appearing in a sex tape at age 13. Although she might be unfamiliar to Lifetime viewers, she has appeared in several films and TV shows before. She starred in the Cinemax series Banshee as Deva Hopewell and appeared in Noah Baumbach’s acclaimed 2012 movie Frances Ha. She made her movie debut in the 2008 Ryan Reynolds/Rachel Weisz romantic comedy Definitely, Maybe. 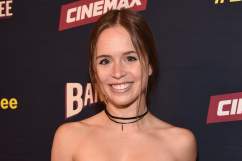 Tyler Johnston is a Canadian actor who stars as Tommy in Story of a Girl. He previously starred in Shut Eye, which ran on Hulu, and the Canadian sitcom Letterkenny. In 2014, he appeared in Grumpy Cat’s Worst Christmas Ever, a TV movie starring the famous meme cat. He’s also appeared in small roles on The CW’s Supernatural and appeared in the second season of The Killing.

Sosie Bacon is the 25-year-old daughter of Bacon and Kyra Sedgwick. She also has an older brother, Travis. Sosie’s coming-out party in Hollywood was as Miss Golden Globe in 2014, but she’s been acting since she was 13 years old. She plays Skye Miller in Netflix’s controversial Thirteen Reasons Why series.

Jon Tenney plays Ray, Deanna’s frustrated father. He can never forgive her for appearing in a sex tape at age 13. Tenney previously worked with Sedgwick on The Closer, playing Fritz Howard. He reprised the role on the spin-off Major Crimes. Tenney also starred in ABC’s Scandal, Amazon’s Hand of God and the short-lived TNT series King & Maxwell with Rebecca Romijn.

Just following up with Playfair's post, still on way to #letterkenny, nothing else to report @letterkennyproblems

Andrew Herr is a Canadian actor who starred in the sitcom Letterkenny. He also appeared in a 2014 episode of Disney’s Zapped and will star in the sequel to Goon, Goon: Last of the Enforcers with Seann William Scott. In Story, he plays Jason, Deanna’s best friend, who is dating someone else.

GettyDirector Kyra Sedgwick, with stars Ryann Shane and Kevin Bacon. Sedgwick and Bacon have been married since 1988.

In Story of a Girl, Kevin Bacon plays Michael, the owner of the pizza shop where Deanna gets a summer job. He also becomes a father figure for Deanna. Bacon is a Golden Globe-winning actor, taking home the Best Actor in a Miniseries/TV Movie for 2009’s Taking Chance. The film also earned him an Emmy nomination. Bacon has been one of Hollywood’s most reliable leading men since the 1980s, shooting to stardom with Friday the 13th, Diner and Footloose. He currently stars in Amazon’s I Love Dick series as the title character.

PLOT: “When a sex video of 13-year-old Deanna (Ryann Shane) and Tommy (Tyler Johnson) goes viral, her life of carefree innocence is changed forever. Three years later, Deanna is still dealing with the fallout of the video, including being branded the school slut. Ready to move on, Deanna longs to escape a life defined by the mistakes of her past.”