On Game of Thrones, the Freys played a big role in Season 6 and an even bigger role in the Red Wedding scene. But last season ended with Arya ending Walder Frey’s life. In case you forgot any of the most important plot points involving the Freys, here’s a quick recap.

House Frey is a noble house from the Riverlands, which had a long history of treachery against House Tully. At the very end of Season 6, Arya killed Walder Frey and let him know, just before his death, that she had also killed Lothar Frey and Walder Rivers, his sons.

Here’s a recap of their role in the series. You can find even more details at the Game of Thrones Wikia.

In Season 1, Catelyn Stark encounters several Freys at the Inn at the Crossroads. Walder Frey, she learned, was turning 90 and taking an eighth wife. She gets House Frey to agree to an alliance, and to give her safe crossing, in exchange for Robb Stark marrying a Frey and taking Olyvar Frey as his squire. Arya will also ultimately have to marry Waldron Frey. Robb agrees.

In Season 2, Robb abandons his oath because he fell in love with Talisa and marries her instead. In Season 3, Robb loses the Karstarks’ support and asks Walder for help taking the Lannister’s seat. Robb agrees to give Walder Frey control of Harrenhal, and for Edmure Tully to marry Walder’s daughter Roslin Frey. The Starks are invited to their wedding, but after the ceremony, Walder murders everyone there: Robb, Talisa, Catelyn, and most of the Starks and Tullys. Only the Boltons survive. The Freys even behead Robb and put his direwolf’s head on top of his body, parading it around. Arya sees all of this happen and escapes.

The Freys capture Edmure, but Brynden Tully escapes. Tywin appoints Walder as Lord of Riverrun as thanks for the massacre.

In Season 4, Roose Bolton marries Fat Walda to seal the Bolton/Frey alliance. The area that the Freys had paramountcy over is now lawless, because many disdain the Freys and don’t want to obey them.

In Season 6, Ramsay murders Roose, Walda, and their son. Brynden Tully retakes Riverrun, weakening the Freys. Meanwhile, the Brotherhood Without Banners are raiding the Freys’ supplies and building a rebellion. Walder sends his sons Lothar and Black Walder to retake Riverrun. Jamie must arrive to help them. He’s disappointed by what they’ve done and takes over. Edmure convinces the Tullys to surrender.

Following this win, Walder has a feast in celebration. After everyone leaves, Arya shows up in disguise, bringing him a pie filled with the body parts of his sons, Lothar and Black Walder. She reveals who she is and kills him in the same way that Cateyln was killed.

This wasn’t the end of the entire Walder family, however. Walder has many descendants and nine wives. It’s not known if his oldest son, Stevron Frey, is alive. And not all of his family was complicit in the Red Wedding. It’s unclear what happens from here. 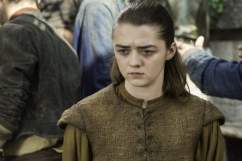 Read More
Game Of Thrones, HBO, Television, TV
Learn all about the Freys and refresh yourself on where we left off with Walder Frey, his sons, and the rest of the family.