Amazon Prime has a thing for F. Scott Fitzgerald. After January’s Z: The Beginning of Everything explored the life of The Great Gatsby author’s wife, the streaming platform adapts his last work, The Last Tycoon. The series, which goes live on Amazon on Friday, July 28, stars Matt Bomer as the title character, Monroe Stahr. Read on to meet the rest of the cast.

The series is based on The Last Tycoon, which was published posthumously in 1941 and finished by writer Edmund Wilson. A new version of the story was edited by Matthew Bruccoli and released in 1993 under the name The Love of the Last Tycoon. The story was also the basis for Elia Kazan’s last film, a 1976 adaptation that starred Robert De Niro.

The Last Tycoon tells the story of Monroe Stahr, a young Hollywood producer who knows he has a heart condition and little time left to make his last great movie. In the pilot, he hopes to make a film about his deceased wife, but the project is shut down when Nazi Germany tells Stahr’s boss that he cannot release a film in Germany about a non-Jewish woman who married a Jew. Stahr is loosely based on the legendary producer Irving G. THalberg, who died in 1936 at age 37.

Now it’s time to meet the main cast of The Last Tycoon.

Matt Bomer leads the series as Monroe Stahr, a young Hollywood producer whose wife, an actress, was killed when their mansion caught ablaze. Stahr is rushing to make one last great picture because he has a heart ailment that he knows will end his life prematurely. Bomer is best known for his role as Neal Caffrey on USA Network’s White Collar. He received critical acclaim and a Golden Globe win for his performance in HBO’s The Normal Heart.

Kelsey Grammer stars as Pat Brady, the head of Brady-American Pictures and Stahr’s boss. The two often clash over money and Stahr’s creative ambitions. Grammer is a three-time Golden Globe winner, winning two for Frasier and another for Boss. He also has four Emmys for Frasier and one for The Simpsons. Grammer was recently seen in Neighbors 2: Sorority Rising and National Geographic’s Killing Jesus.

Lily Collins, who just starred in Netflix’s To The Bone, plays Brady’s daughter Cecelia. She dreams of working in the movie business… and becoming Stahr’s girlfriend. Collins also starred in Netflix’s Okja. Her other credits include Mirror Mirror and The Mortal Instruments: City of Bones. She picked up a Golden Globe nomination for Rules Don’t Apply.

Dominique McElligott plays Kathleen Moore, a waitress who catches Stahr’s attention just as she hopes to go back home to Ireland. McElligott also starred on House of Cards as Hannah Conway. She has been seen in the movies The Guard, Leap Year and Moon. Her other TV credits include Hell on Wheels and The Astronaut Wives Club.

Jessica De Gouw plays Minna Davis, Stahr’s deceased wife. She was a big star when she died and Stahr planned on turning her life into a movie. De Gouw recently starred in WGN’s Underground and NBC’s Dracula. She also played The Huntress on The CW’s Arrow. Her most recent film was the Australian movie OtherLife.

Rosemarie DeWitt plays Rose Brady, Brady’s long-suffering wife. DeWitt had a small role in last year’s La La Land and also appeared in an episode of Netflix’s Black Mirror. She is also known for her roles on Mad Men and United States of Tara. Other recent film credits include Sweet Virginia, Poltergeist, Kill The Messenger and Men, Women & Children. 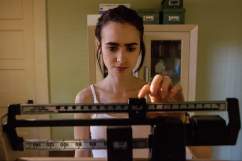