Alert fans who watched the Season 8 trailer for The Walking Dead at Comic-Con noticed that the show’s logo is now very different. It’s no longer decaying. What could this mean? Here are the top theories, along with photos of the logo over the years.

This is pretty big because over the years, the logo has been slowly decaying from season to season. Even TheWalkingDead.com noted this at one point:

Did you know that AMC’s been subtly changing the Walking Dead logo on the title screen of the opening credits? It’s been decaying since the first season to reflect the decay of the world in the show (hm, does that make this a de-evolution of a logo?). Pretty cool! By season 20 it will be completely unreadable! Just kidding. We captured the title screens and put this GIF together for you to check out.”

Photos of The Walking Dead Logo From Season to Season

The Season 2 title card was pretty much the same:

And now the Season 3 title card, which is starting to decay a little:

Next, the Season 4 title card, which seems to be decaying a little more, but it’s pretty subtle. Do you see a difference?

And now the Season 5 title card, which is just subtly more decayed, mostly in the “D.”  What do you think?

And now on to Season 6. It doesn’t look all that much different, but there is some additional decaying that you can point out.

And last season’s title credit is below, the logo from Season 7. This time, they decided to quit being subtle and go all out in the decay. Must be symbolic of Negan:

So yes, compared to Season 7, there’s a big difference in the title card that was shown after the Season 8 trailer. It’s a huge difference:

Is it possible this isn’t the official title card for Season 8, and just one for the trailer? Sure. But AMC has been so deliberate about the logos, it seems unlikely. Now we have a greenish background instead of the typical dark brown/beige, and a bright white logo instead of the yellow logo

Why Is the Logo Different for Season 8?

So fans have some theories on why the logo is so different now. This is the brightest and cleanest and most hopeful that it has ever looked. If the “time jump theory” from the end of the trailer is correct (see Heavy’s story here), then this might signify “new hope” for our protagonists, a new life, and maybe a better world in the future.

If Rick and the protagonists win the war that’s coming with Negan, maybe it also signifies a new world where people don’t have to fear one another. Maybe, if Ezekiel survives, he will help them create a new society that is free of fear and killing. The green background certainly could symbolize the idea of restoration, of new life and the growth of a new society.

Or maybe the walkers are dying out. Instead of everything around them decaying, things are finally starting to grow.

Other fans who have read the comics think that the logo symbolizes Volume 22 of the comics, which is called “A New Beginning.” We won’t go into detail about what happens in the volume, so as not to spoil anyone who hasn’t read the comics. But it would make sense that we’d get a brand new logo if it went along with the idea of a new beginning.

Opening Credits Scenes for Each Season

Now, here are the intros/opening credits for each season, in case that helps you when you’re comparing the logos:

Here are the opening credits for Season 2:

And now the Season 3 intro, when things really change in the opening:

And now the Season 4 intro:

And now the Season 5 intro:

And now the Season 6 intro:

And finally, the most recent intro from Season 7:

What do you think the new logo means? Let us know in the comments below. 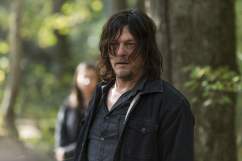