While the real Tour de France continues, Andy Samberg is making fun of it and the sport of cycling with his second HBO sports mockumentary, Tour De Pharmacy. Just as 2015’s 7 Days In Hell made fun of tennis’ controversies, this new, hour-long special looks at doping with a comedic angle. Even Lance Armstrong makes a cameo! The film debuts at 10:00 p.m. ET on Saturday, July 8. Read on for a preview.

Other big stars making cameos are Will Forte, Maya Rudolph, Kevin Bacon, Phylicia Rashad, Mike Tyson and James Marsden. The Los Angeles Times notes in its review that Lance Armstrong appears as a racer “bold enough to speak frankly under the guise of anonymity.”

In addition to Samberg, the film was made by the same team behind 7 Days In Hell. Jake Szymanski (Mike And Dave Need Wedding Dates) returned to direct, while Murray Miller (Girls) is back as writer and executive producer.

TV CHANNEL: HBO (To find out what channel HBO is for you, click here to go to TVGuide.com’s TV Listings. Chance “provider” to your cable/satellite provider, then scroll down to find HBO. In order to have access to HBO, you need a subscription.)

PLOT: “In 1982, during a dark and fictitious time in cycling history, the sport’s most venerable, time-honored race was marred by the doping of virtually all of its competitors. Riddled with nefarious characters, that year’s competition was a hornet’s nest of moral depravity. Through the perspective of five riders, TOUR DE PHARMACY gives an inside look into the grim realities of the darkest event in a sport notoriously tainted by controversy.” 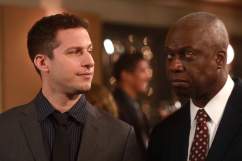 ‘Brooklyn Nine-Nine’ Renewed or Cancelled: Is Andy Samberg Back for Season 5?