During the scene when Bill Hastings was being interrogated in Season 3 Episode 9 of Twin Peaks, he mentioned a website he ran called TheSearchForTheZone.com. Well, that website is actually real and it appears that David Lynch has left quite a few clues and Easter eggs for his fans.

Join us as we look through all the clues from this 90s Geocities-like website and explore what they might mean. The website may appear to just be an advertisement for the Twin Peaks soundtrack, but it’s actually a lot more than that.

If you go to the center bottom of the website, just above the trees, and hover your mouse, a set of coordinates will appear:

Click on the coordinates and you’re taken to a very shaky video that is obviously a video of the Convenience Store.

ShowtimeAt times, the words Convenience Store show up just over the store.

Apparently this is the approximate location of the convenience store. The coordinates themselves take you here, to South Dakota.

As an interesting note, a Redditor (keylimekai) mentioned that these coordinates are near Lookout Mountain, where a mystery Thoen Stone is buried. It was the last message left by white settlers after finding gold and before likely being killed by Native Americans. The stone reads, in part: “All ded but me, Ezra Kind. Killed by Ind[ians] beyond the high hill got our gold June 1834.Got all the gold we could carry our ponys all got by the Indians. I hav lost my gun and nothing to eat and Indians hunting me.”

Right at the top of the website, we see these words:

We will have to reconcile with the question that if someone from outside our familiar world gains access to our plane of existence, what ramifications will that entail? There might be forces at work from deep dimensional space, or from the future…or are these one in the same? Think of the events that could have splintered time? The things that could have laid the seed for a starting point for this development? Perhaps technological innovations or the assassination of President Kennedy?

This is just a random trivia note, but Agent Cooper himself said once in the original series that he would like to solve JFK’s assassination.

It’s also helpful to note that according to the site, it was created on June 1, 1997, the same year that Dougie was created. (However, technically the website was registered in November 2016.)

Right at the end of the opening message, the site reads: “Click here to read my older journal entries.” If you click the link, you’re taken to a 12-minute video that has music from the new season mixed with strange audio that’s hard to understand. You also see flashes of light at times.

Fans are still trying to decipher what all this means. But around 9:15-9:35, you can hear something that sounds like “Jack … Security Threat.” Some fans think the voice is saying “Jack Rabbit Palace is a security threat.”

Here’s a direct link to the video.

‘Reading Links’ & What They Mean

Beneath this section on the website, you’ll find a list of reading links. These actually seem to go to real websites, not sites created by David Lynch for the TV show. But they are about topics linked to the show. Many of the links reference parallel universes. Hastings himself talked about finally entering an alternate dimension and talking to Briggs.

Here are just a few more points from the links, but there is likely much more to find.

The first link, by Grant Chronicles, is about Nibiru, which isn’t part of the show. But the first photo on the Grant page is very reminiscent of where we saw The Giant living in Episode 8.

The Horizon Project link is strange, because it’s created using a free WordPress theme that has been around for a few years. The site is in German and appears to be about investing in stocks and trading on the Internet.

The story about Hugh Everett refers to how he believed in multiple universes, but eventually turned to top secret military research after being rejected by the scientific community. It’s a real article by Scientific American from 2008 and may have some parallels to Briggs, who also worked in top secret military research. The story was sad, though, because Everett died in his sleep at only 51, and his son said he and his father had never touched.

The link to Fred’s Blog no longer works, but you can see the last entry using Web Archive.

After this section we see Heinlein links, apparently a favorite scifi author of Hastings.

What the Wavs Links Mean

The first WAV file sounds like the sounds the Giant played for Cooper in the first episode. Redditor connorlately pointed out that Electrical Interference 2 appears to be the sound the Woodsman made when he approached a car in Episode 8 and asked for a light. Redditor i_am_thoms_meme said, however, that the second file was the sound played when Mr. C (Bad Cooper) drove his car and was almost sucked into the cigarette lighter.

On the Vortex WAV file, at one point you may think you hear someone shouting, possibly yelling “HELP!,” but it’s hard to understand.

Fans say that even after running the files through filters, they can’t make out anything more specific.

The guestbook has some interesting entries, with the last one being left on November 20, 2015 which reads: “Where are you people?” This is apparently a reference to Hastings never returning to his website (since he was arrested.)

On September 8, 2015, Tom Pence wrote a strange message that includes, “was that light really fire? was the boy burned? His face looked burned. When will you do the ‘thing'”? The “thing” likely refers to Hastings’ traveling to the alternate dimension. We don’t know how they did it, but if Pence’s statement is related, then one has to wonder if it involved some kind of light and possibly burning someone. If that is true, then perhaps when Briggs died in a fire, he didn’t really die, but traveled to another dimension instead. (And this might also be what happened to the Log Lady’s husband when he died in a fire — he was transferred to another dimension and talks to her through a log.) This is, of course, all just conjecture.

References to BH in the guestbook are for Bill Hastings, and references to HV are for Heinrich Viegel, whom Hastings said helped him with the website. It’s unclear who Heinrich is… Could it possibly be a pseudonym for Ruth, since one person asks “when will you do the thing?” and we know Ruth traveled with Hastings to the alternate dimension?

That concludes the Easter eggs and clues found on this ARG website so far. If you have found anything that we missed, please let us know in the comments below. 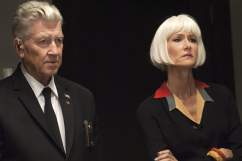