Tragedy struck on June 11th when Dr. Brandon Rogers was killed in a car crash. The 29-year old had auditioned for America’s Got Talent in the hopes of becoming a singer, but it wasn’t until a month after his death that his audition tape aired on television

As fans clamored to pay tribute to the singer on social media, his brother Danni decided to turn things around, and thank the fans for their touching support. He posted an emotional video of himself on Instagram, with the caption “I can’t respond to everyone (too heartbreaking) but I did want to thank EVERYONE for their prayers and condolences, It really does mean so much to me and my family. I lost my best friend yesterday, but to see all the lives he’s touched brings joy to my heart.” Watch the full video below.

I can't respond to everyone (too heartbreaking) but I did want to thank EVERYONE for their prayers and condolences. It really does mean so much to me and my family….. I lost my best friend yesterday ?, but to see all the lives he's touched brings joy to my heart.

Danni is visibly emotional throughout the video. “I didn’t know what else to do,” he says after a lengthy pause, “So I just wanna put this out there. I wanna thank everybody for their kind words, and the phone calls and the messages,” he continues, “It’s just a testament to how many lives my brother actually touched. It’s hard for me to talk to people on the phone right now so I apologize… but me and family truly appreciate it, thank you, thank you.”

Rogers was actually discovered by America’s Got Talent producers back in 2016. At the time, he had posted an Instagram video of himself singing the Boyz II Men hit, “On Bended Knee.” There are 100,000 fans on Rogers’ Instagram, where he used to post videos of himself singing. At the time of his death, TMZ reported that his family was hoping that the footage would be aired, feeling that it would have been what Rogers wanted.

NBC honored their request and aired Rogers’ stirring rendition of the Stevie Wonder song “Ribbon in the Sky.” Judges Heidi Klum, Mel B, Howie Mandel, and even Simon Cowell all praised his performance, and allowed him to move onto the next round. Danni reposted the video on his Instagram with the caption: ” I was so blessed to be there with you at your audition. I think I was more nervous than you were. Lol So happy and proud of you. Love you always.” Watch the video below. 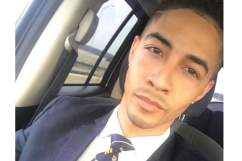