Maia Campbell caught the attention of the world over the weekend, when a video of her looking disheveled and asking for drugs went viral. Campbell, who has long suffered with addiction and bipolar disorder, was thought to be on the rebound after coming clean a few years ago. This sudden relapse concerned not only her fans, but her former In the House (1995-98) co-star LL Cool J.

LL (born James Todd Smith) posted a photo of Campbell on Instagram on Monday, with the caption “If someone has a contact on Maia pls let me know..” The legendary rapper also took to Twitter to criticize the man who filmed Campbell instead of seeing that she got proper care for her relapse.

#LLCoolJ is seeking contact info for his former costar #MaiaCampbell after a recent viral video revealed that she has relapsed and is back on drugs ??

“Instead of pulling out your phone and filming someone who’s obviously having trouble,” he wrote, “Maybe lend a helping hand? A kind word?” The man recording the video was later revealed to be an Atlanta rapper named T-Hood. Watch the uncensored video here.

While whereabouts of Campbell remained unknown heading into Monday, it appears that the actress caught wind of LL’s message. She even went as far as to post a response video on YouTube, where she makes it very clear that doesn’t want his help. “Hey Todd, look bro,” she says, “I love you. I don’t need help. I just need a benefit concert for mental health… Don’t DM me… I’m good… Don’t call me. I’ll call you.”

Campbell covers her mouth during much of the video, and her hair color is noticeably lighter than it was in the video from a few days prior. She adds that she’s “doing good” and that she has property and investments under her name, as well as the reality show From the Bottom Up. Around the minute mark, however, Campbell becomes visibly emotional, and repeats that she needs LL to do a benefit concert for mental health.

She provides the rapper with three different ways to contact her, before anxiously walking away from the camera and back into the what appears to be a barbershop. LL tweeted out his response to the video on Monday night, saying “You can’t help someone who doesn’t want your help.”

You can't help someone who doesn't want your help.

There are some social media users, however, that believe that there’s something awry with Campbell’s video. According to Media Take Out, T-Hood claims that Campbell was paid to film the response video and say the things she did. “The video the man posted of her in the barbershop was completely staged,” he wrote, “And he paid her to say those thing (sic).” Read the full statement below.

Atlanta Rapper 'T hood' aka the man behind #MaiaCampbell viral video says that the VIDEO of her saying that she doesn't need help is staged!!! The barbershop owner paid her to do it!! #LLCoolJ still hasn't gotten in contact with him. 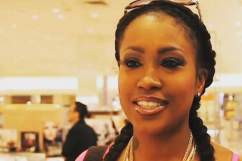