Thirty Seconds to Mars, the group fronted by Oscar-winner Jared Leto, performed their new single “Walk on Water” at the 2017 MTV Video Music Awards. Leto repeatedly teased a new technology for the performance. Considering he appeared as a hologram at San Diego Comic Con, that’s not surprising. During the performance, the group’s heat signatures appeared on the screen. Travis Scott also joined the group.

“Walk on Water” will be featured on the group’s upcoming fifth studio album and was released on August 22. It’s their first piece of music released by Interscope after working with Virgin. The new record is also their first album since 2013’s Love, Lust, Faith and Dreams, which included the hits “Up in the Air,” “Do or Die” and “City of Angels.”

The release of the single was preceded by a very funny skit, which featured the three bandmembers getting yelled at by an Interscope record executive for taking so long to release their new album.

“With the help of groundbreaking nanotechnology, chatbots and self-driving music software, we have wrangled from the depths of our cold black hearts, some semblance of a song,” Leto told NME. “We can’t wait to get back on the road and we couldn’t be more proud to share with you the first first single off of our new album. And yes, we have been working on it for four years. The last time we put an album out, there were no self driving cars, no fidget spinners, President Trump was still that guy on The Apprentice and Jon Snow hadn’t even died yet. #SpoilerAlert.”

In an interview with MTV News, Leto said it took three years to write and record the song. The VMAs will feature the first ever live performance of the track.

Thirty Seconds to Mars, which is made up of Leto, older brother Shannon Leto and Tomo Miličević, have won three VMAs. In 2006, “The Kill” won the fan-voted MTV2 Award. In 2010, “Kings and Queens” won Best Rock Video and “Up In The Air” won the same award in 2013. 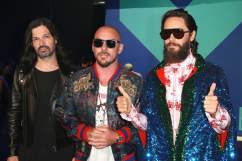