Aaron Carter has decided to clear the air on his sexual orientation, and did so on Saturday night in a lengthy Twitter post.

The pop singer, who was recently arrested on DUI charges, opened the post by writing “To start off, I would like to say that I love each and EVERY ONE of my fans. There’s something I’d like to say that I feel is important for myself and my identity that has been weighing on my chest for nearly half of my life. This doesn’t bring me shame, just a weight and burden I have held onto for a long time that I would like lifted off me.”

That weight, in turn, was Carter’s bisexual preference. “When I was around 13-years-old I started to find boys and girls attractive. There were years that went by that I thought about it, but it wasn’t until I was 17-years-old, after a few relationships with girls, I had an experience with a male that I had an attraction to who I also worked with and grew up with.”

Carter goes on to discuss his passion for music and end the post with a quote from Boy George, who is an openly gay artist.

The post caused quite a stir on Twitter, as many praised Carter for having the bravery to come forth and reveal such personal information. “I honestly didn’t remotely suspect him of being gay, but I’m so proud of him coming out,” wrote one user, while another added “LIVE YOUR BLISS AARON CARTER.”

Oh wow Aaron Carter just came out of the closet. I honestly didn't remotely suspect him of being gay, but I'm so proud of him coming out ???

lots of hugs to @aaroncarter .

i hope u r filled with a sense of freedom .

Others, on the other hand, argued over the distinction between gay and bisexual, given that Carter clearly alluded to the latter in his post.

“Aaron Carter did not come out as gay,” wrote one irritated user, “He most def said he likes both women and men. Y’all love to ignore bisexuality.”

Yall aint shit. Aaron Carter did not come out as gay. He most def said he likes both women and men. Yall love to ignore bisexuality.

aaron carter coming out as bisexual while everyone's tweeting "aaron carter is gay!!!" is an exact example of what bi erasure looks like

Carter’s support of the LGBTQ community and his sexuality have been the source of speculation over the past few years, mostly due to his relationship with openly gay fan Chris Crocker. The two have posted several photos together on social media, according to NewNowNext, with one including the suggestive caption “Aaron has found his candy” in reference to his popular 2000 single “I Want Candy.”

Crocker also posted a video where the two almost kissed but it was later deleted. Lucky for fans, somebody recorded the clip and posted it on YouTube. Watch it below.

Carter recently split up from his photographer girlfriend Madison Parker. The two dated for over a year, and a source close to the singer tells TMZ that he and Parker still “love each other and respect one another dearly.” To learn more about Parker, click below. 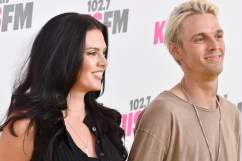