On the Game of Thrones Season 7 finale, we found out that Jon Snow’s name was supposed to be Aegon Targaryen. Lyanna Stark and Rhaegar were married and Jon was not a bastard.

What is so significant about the name in the show’s history?

Aegon the Conqueror was the first Targaryen to come from Essos to Westeros. He was the one who built the Iron Throne and conquered Westeros with his three dragons. In fact, he made the table map we see in Dragonstone. He was the one who “invented the wheel,” as Tyrion said, and know Dany wants to break the wheel.

Prince Aegon was Aegon the Conqueror’s grandson. He did not sit on the Iron Throne.

Aegon II Targaryen was King of the Iron Throne and usurped the throne from his half-sister during the Dance of Dragons civil war. Joffrey liked to share that Aegon II ordered his dragon to eat his sister so he could take over the throne. He was eventually killed by his own men, after his mind started to slip from milk of the poppy that he had to take for severe injuries.

Aegon III Targaryen also sat on the Iron Throne. His mother was the sister that Aegon II fed to a dragon, and he saw it happen.

Aegon IV Targaryen also sat on the Iron Throne. He was sometimes called “The Unworthy” and one of the worst Targaryen kings. He legitimized his bastard son when he died, thus legitimizing the Blackfyre branch of the Targaryens. In the books, he was known as a corrupt and gluttonous leader.

Aegon Blackfyre – He was the grandson of Aegon IV and the oldest son of Daemon Blackfyre, whom Aegon IV legitimized.

Aegon V Targaryen also sat on the Iron Throne and was known as “Egg.” Aegon was a main character in GRRM’s Dunk and Egg novellas. He was the 15th Targaryen to rule the Seven Kingdoms. His son was the Mad King Aerys, and he was Dany’s grandfather. He was the youngest child, so he wasn’t expected to take the throne. But Maester Aemon refused because of his maester vows and his older brother Aerion died, so the crown became his. For a while, Aegon was the squire of Ser Duncan the Tall, who is related to Brienne. Aegon and Ser Duncan died when Aegon tried to hatch new dragon eggs using fire and magic. Instead, the entire palace was burned down.

Rhaegar had another son named Aegon. Here’s the weird part. Rhaegar apparently really loved the name Aegon, because he didn’t just name his son, Jon Snow, Aegon. He also named his other son with Elia Martell “Aegon” too. Wouldn’t that be just a little confusing?

Elia was Oberyn Martell’s sister. The Mountain raped and killed her and her children, Aegon and Rhaenys.

Rhaegar was obsessed with fulfilling prophecy, which is likely part of the reason why he was drawn to Lyanna Stark. In A Clash of Kings from GRRM’s book series, Dany had the following vision of her brother Rhaegar:

The man had her brother’s hair, but he was taller, and his eyes were a dark indigo rather than lilac. “Aegon,” he said to a woman nursing a newborn babe in a great wooden bed. “What better name for a king?” “Will you make a song for him?” the woman asked. “He has a song,” the man replied. “He is the prince that was promised, and his is the song of ice and fire.” He looked up when he said it and his eyes met Dany, and it seemed as if he saw her standing there beyond the door… “There must be one more,” he said, though whether he was speaking to her or the woman in bed she could not say. “The dragon has three heads.” He went to the window seat, picked up a harp, and ran his fingers lightly over its silvery strings. Sweet sadness filled the room as man and wife and babe faded like the morning mist, only the music lingering behind to speed her on her way.

Now we know that Rhaegar did indeed have three children. And both of his sons were named Aegon Targaryen. 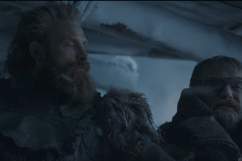