Aidan Gillen, who plays Petyr “Littlefinger” Baelish on HBO’s Game of Thrones, is dating Irish singer Camille O’Sullivan. The two both have children from previous relationships, but none together. The two made their public debut as a couple in 2015.

The 49-year-old Gillen is best known for his role as the scheming Littlefinger, but he’s been acting in film and on television since the 1980s. Before Game of Thrones, Gillen was best known for playing Thomas J. “Tommy” Carcetti in HBO’s The Wire from 2004 to 2005. His movie credits include King Arthur: Legend of the Sword, Sing Street and Calvary. He also appeared in a small role in The Dark Knight Rises.

Here’s what you need to know about the 42-year-old O’Sullivan and her relationship with Gillen.

O’Sullivan and Gillen were seen together at a U2 concert in Belfast in November 2015. A source The Irish Independent that they were “very lovey-dovey” at the concert.

“The pair of them were dancing away and were very touchy-feely the whole night,” the source told the Independent. “They seemed very close and are clearly enjoying each other’s company.”

Gillen rarely comments on his private life, but sources told the Independent that they were seen at other events together. They went to the San Francisco Game of Thrones premiere event in 2015 together as well.

Gillen was previously married to Olivia O’Flanagan. They had two children together, Berry and Joe.

2. O’Sullivan Has a Daughter With The Waterboys Lead Singer Mike Scott

O’Sullivan previously dated Mike Scott, the lead singer of The Waterboys and they went public with their relationship in 2012. The two have a daughter, Lila-Elodie, who was born in 2013.

“Nobody on my street knew I was pregnant,” she told the Irish Independent of her pregnancy. “I had a very discreet little bump the whole time and I’ve done a lot of Pilates since then. I only told three people. So when neighbours saw me walking around with her they were like ‘who is that child?’ And then when I told them she still didn’t have a name yet you could see the ‘call social services’ look in their eyes. It’s quite unlike me to have a child. I’m more a cat person. So sometimes I call her a cat. What a lovely cat in our family!”

She said in 2013 that giving birth felt like “someone had injected speed into me.” She added that she had prepared for a daughter so if it was a boy, he would have had to play with dolls. At first, she didn’t want to reveal the baby’s name and refused to give the father’s identity.

However, Lila-Elodie’s was revealed publicly in 2014.

3. She Was Nearly Killed in a Car Accident in 1999, Which Inspired Her to Leave Her Job as an Architect

Before 1999, O’Sullivan was a successful architect with an award from the Architectural Association of Ireland by day and a cabaret singer by night. But in 1999, she was involved in a near-fatal car accident, which left her hospitalized for over a year. After surviving the crash, she decided to follow her dreams of becoming a singer.

According to the U.K. Independent, the accident fractured her skull, shattered her pelvis and left tendons in her hand shredded. She needed a frame to help her walk.

“It was touch and go at one stage. I had to learn to walk and use my hands again. But it was a turning point. I stopped thinking ‘What if?’ and decided to leave architecture to dedicate myself to cabaret,” she told the Independent.

After she left the hospital, O’Sullivan was “Scared of the world.” However, her ex-boyfriend helped her perform in Dublin on crutches.

“I did three gigs that year,” she told the Independent. “Nobody wanted to know, especially in Ireland. But I refuse to do corporate stuff. I wanted to go elsewhere in a show, where people are not passive. Cabaret had been diluted and I wanted to make it relevant again. Then, after Chicago [the stage musical and movie], cabaret suddenly became popular again.”

4. Her Father Is an Irish Racing Driver & Her Mother Is a French Artist

Although O’Sullivan was born in London, she was raised in Passage West, near Cork, Ireland. According to the Irish Independent, her father is Dennis O’Sullivan, an Irish Formula 2 racing driver. He met her French mother, artist Marie-Jose, at an event.

Although she often performed for family, her father urged her to go to the University College Dublin, where she studied architecture.

“I struggled at university; I liked architecture but I loved performing. At that time, though, I hadn’t found my own voice. So I took a year out and went to work in an architects’ practice in Berlin,” she told the U.K. Independent.

While in Berlin, she really caught the cabaret bug, and became friends with cabaret singer Agnes Bernelle after returning to Ireland. “Agnes had ended up in Dublin and she gave me the best advice: to do this right, you have to be a better actress than a singer, it’s all about the story,” she said.

Despite her success with architecture, she knew she always wanted to be a singer instead. Then the car crash happened and she knew how she wanted to spend the rest of her life.

5. O’Sullivan Is Also an Actress & Appeared in ‘Mrs. Henderson Presents’ With Judi Dench

When O’Sullivan isn’t singing, she’s acting on the stage and screen. Her acting credits include John Carney’s On The Edge (2001), Mrs. Henderson Presents (2005) with Judi Dench, and Asylum Seekers (2009). She also had a role in the SundanceTV series Rebellion.

O’Sullivan also started acting on the stage while at University College Dublin. In 2011, she appeared in a one-woman adaptation of Shakespeare’s The Rape of Lucrece, which was commissioned by the Royal Shakespeare Company.

In an April 2016 interview with the Irish Independent, O’Sullivan didn’t want to discuss her life with Gillen.

“We are trying to live our life, not talk about the thing. I would probably drive him more crazy – I won’t talk too much about him! – but he is a wonderful thinker, and very funny, too, with a serious side,” she said. 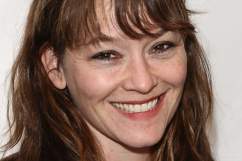