Tonight airs another episode of Bachelor in Paradise, with more cast members joining the show and stirring up drama. The official ABC synopsis of tonight’s show reads:

Tonight’s wild and wildly entertaining episode of Bachelor in Paradise, on The ABC Television Network, begins, ironically, with the arrival of a virgin with a date card. Although her “friend” from Nick’s season of “The Bachelor” warns the virgin that her man would be a “waste of time” asking, he lets her know that, despite what she might have heard, he would love to go on a date with her. And so he does.

Now that you have an idea of what you’re getting into on the show tonight, let’s get into the episode details and spoilers … But, DO NOT CONTINUE TO READ IF YOU DO NOT WANT TO KNOW ANY SPOILERS ABOUT THIS SEASON.

When Danielle Lombard showed up in Paradise, her being there created a tense love triangle with Kristina Schulman and Dean Unglert. Tonight, Christen Whitney, the virgin from Nick Viall’s season of The Bachelor, arrives and she has her eyes on Matt Munson. But, Munson has been seeing fellow cast member Jasmine Goode and Goode is not one to keep her mouth shut. When Whitney and Munson start getting romantic, Goode is not having it.

Derek Peth & Taylor Nolan Get Into a Fight

Could Taylor and Derek's relationship last a lifetime? #BachelorInParadise

Derek Peth and Taylor Nolan seemed to hit it off right off the bat in Paradise. They have been the solid couple on the show and tonight, it looks like they may have their first major fight. And, in promos, it looks like Peth’s words get the better of him.

According to Reality Steve, Daniel Maguire shows up at tonight’s rose ceremony, which is good for Lacey Mark, who was hoping he would join the show. But, with a rose ceremony, comes disappointment. Two women, Alexis Waters and Sarah Vendal, are reported as being eliminated tonight and Reality Steve says that Matt Munson also decides to leave the show after giving Jasmine Goode his rose. Reality Steve reveals the rose ceremony rundown as this:

Jack gave his rose to Christen
Robby to Amanda
Diggy to Dominique
Dean to Kristina
Ben Z. to DLo
Adam to Raven
Derek to Taylor
Daniel to Lacey
Matt to Jasmine 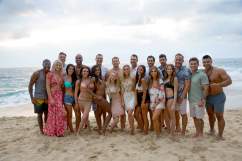