The week you have been waiting for! The FIVE who will be America's next #BoyBand sensation will be revealed Thursday!

Tonight is the finale episode of ABC’s reality competition Boy Band and five of the remaining eight performers will score a recording contract as a new band. The contract will be with Hollywood Records and the new band’s debut single will be performed during the finale tonight.

Now, let’s check out the remaining eight contenders who are hoping to go home winners. Get to know each of them below.

This is the moment I have worked so hard for. All of the late school nights, the hard days, the tears, and the sacrifices I made were all for this moment right here. I left it all on that stage last night and it was all for you guys. For you guys to be convinced to vote for me. It was also for my family. They have done so much for me and I can’t thank them enough. Last week I was saved by America, and this week I really hope America can take me all the way. My dream is literally just votes away. Make sure to vote for me on abc.com/boyband and spread the word. I love you all so much. Gracias por todo su apoyo❤️. x

On Friday night you’ll find Sergio performing downtown on a street corner perfecting his craft instead of hanging out with friends. If you don’t find him there then he is probably jamming at his home studio or in the bathroom doing his hair. Last year, Sergio gave up playing soccer and his chance at a college scholarship to pursue music. Sergio’s parents are immigrants from Mexico who started a successful cleaning business so he knows the hard work it takes to be successful.

Calderon speaks fluent Spanish and English and he often gets compared to Bruno Mars.

https://www.instagram.com/p/BXOhncchlLZ/
Michael Conor is an 18-year-old singer from Cleveland, Ohio, and according to News 5 Cleveland, his real name is Conor Michael Smith. And, in addition to being a singer, he is actually a classically trained violinist, but also enjoys rap. Conor was reportedly discovered by ABC via social media.

https://www.instagram.com/p/BYCb7QajYmY/
Jaden Gray comes from Hawthorne, California and he is 16 years old. Gray comes from a musical family and he grew up singing in church, which might explain why he is so vocally skilled. He has been consistently one of the strongest singers in the competition.

Jimenez is a 17-year-old singer from East Los Angeles, California and he sang Ne-Yo’s song “Because of You” for his Boy Band audition. According to Jimenez’s ABC bio:

Mikey knows he’ll have the best hair in this competition because his family owns multiple hair salons. Mikey never leaves the house with messy hair…unless he is going for the messy hair look. He gained his confidence as an artist by singing to the customers in the hair salon. His mother works two jobs to support him and his younger sister. Mikey is the man of the house and does a lot of the cooking and cleaning to help his mom.

https://www.instagram.com/p/BX_rSl1AmEh/
At just 16 years old, Pendleton pursues a music career, coming from Nashville, Tennessee. For his audition on the show, Pendleton kept it old school and performed the song “My Girl”. Pendleton actually goes by the name K-MARZZZ and he prides himself on being a role model to his siblings.

Chance Perez is 19 years old and comes from Seal Beach, California, where he shares custody of his young daughter Brooklyn with his ex-girlfriend. Perez has had a rough time growing up, losing his father when he was just 8 years old. He is hoping that being on Boy Band will help him with his daughter’s future, one day having enough money to put aside a college fund for Brooklyn. Perez was 17 years old when he became a father and he remains close friends with his baby mama.

https://www.instagram.com/p/BYFERbuhwL9/
Drew Ramos hails from the Bronx in New York and he is 19 years old. Prior to being on the show, he would ride the subways in New York City, playing music on an acoustic guitar. Ramos is a self-proclaimed Mama’s Boy and he hopes to make it big in music so that he can provide a better life for his mother.

Tutton is just 15 years old and he is from Shorewood, Wisconsin. Prior to being on Boy Band, he has actually been an actor in television and on the big screen as well. He played the role of Brock on the ABC show Fresh Off the Boat and was also on a few episodes of the show Doc McStuffins. And, in 2012, he appeared in the movie LOL, which starred Demi Moore and Lindsay Lohan. Tutton comes from a musical and theatrical family.

Who do you think will make the band tonight? 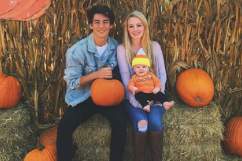