As production is suspended on Bachelor in Paradise, Carly Waddell and Evan Bass prepare for their nuptials to take place on the show. Tonight, viewers get to see the couple tie the knot in front of their close family, friends and former Bachelor and Bachelorette cast members.

Still in the afterglow :) thanks for all the love y'all.. (zoom in on my goddaughter and flower girls face for extra fun) #bachelorinparadise #whowouldhaveeverdreamedthiswouldhappen

Last season, Waddell and Bass became engaged on Bachelor in Paradise and their relationship was something that many viewers thought would never happen. Bass relentlessly pursued Waddell, who continued to express her feelings of disinterest in Bass. And, when Waddell finally realized she had feelings for Bass, accepting his marriage proposal, Bass wrote the following heartfelt message online:

So grateful to Carly tonite. She saw thru all of my weird, crazy. And saw me for who I am. We all deserve someone who loves us at our worst.

Now, Bass and Waddell are happily married and recently announced that they are expecting a baby together. The pregnancy was apparently a “surprise,” but the couple appear to be as excited as ever. They actually found out about the pregnancy right after their wedding in June on Bachelor in Paradise, while they were still in Mexico. Waddell told People:

It was a great surprise, it’s a great little miracle. I was a little late … We took a pregnancy test in Mexico, and we saw the thing [in Spanish] and were like, ‘What does that even say?’ So we Googled it.

I will never forget this feeling. I am so happy to be able to share this perfect day with you all tonight on ABC! Thank you to @vidanta for setting the stage for a wedding truly in paradise. Dress @idancohenofficial #BachelorInParadise Photo: @crisbernalphoto

Prior to tying the knot, Waddell talked about her feelings on family, especially since Bass already had kids from a previous relationship. Waddell gushed to Glamour Magazine:

I’m so excited about him having kids. I can’t wait. I know he’s dated people in the past that have said, “Oh, you’re a dad? I’m not into that.” I’m so into that. I’m 30. I want kids; he wants more kids. We’ve already discussed that. He has three boys—ages 14, 11, and 8. We’ve talked about having kids. He wants more, and I’m game. We’re just going to be maybe one big happy family, and I’m so excited. I can’t even contain my excitement for that.

Tune in tonight at 8 p.m. ET/PT on ABC to see Waddell walk down the aisle and marry Evan Bass in Mexico. 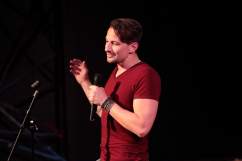