Chase Goehring, 21, is a contestant on America’s Got Talent and he earned the golden buzzer pass from guest judge DJ Khaled during the Judges’ Cuts. The golden buzzer is a free pass to the live shows and each judge gets one opportunity to gift it to a contestant.

Judge Simon Cowell recognized Goehring when he appeared on stage because Goehring was previously a contestant on The X Factor. And, apparently, being on The X Factor wasn’t originally in the plans for Goehring as J-14 reports him explaining:

I actually didn’t plan on auditioning for The X Factor. I was participating in a younow.com singer/song-writer competition and one of the judges worked with Sony Music. She was like, ‘We think you would be a great addition to the show.’ So a couple weeks later I ended up in Long Island, New York and auditioned for the judges.

Goehring is already popular on YouTube and performs original material as a singer and songwriter. He is well versed in guitar as well as the ukulele and has a talent for rap. And, though Goehring has been compared to music artist Ed Sheeran, he tells Hollywood Life that:

It is a huge honor, but do I want to be the next Ed Sheeran? I don’t really think so. I think I would like to be the first Chase Goehring and that is kind of how I see myself and see the future for myself. But I would love to work with him, I would love to write with him and do all that stuff because he is really inspiring in the sense that he is a ginger like myself.

When it comes to music style and writing and stuff, I started doing music before I knew who Ed Sheeran was so I was always doing this little thing of mine and it has just kind of matured over the years.

Goehring is one of many singers in this season’s America’s Got Talent, but he definitely has a fighting chance. Check out a couple of his performances from the show below. 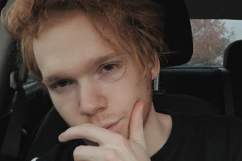