On tonight’s episode of Dance Moms, part 2 of choreographer Laurieann Gibson coming aboard and Chloe Lukasiak returning to the competition world after two years of being away continues.

Let’s first get into Lukasiak’s return. So, what made this dancer come back to the show? In an interview with Seventeen, she explained:

Well, at the end of the last season I’d heard that my ALDC teammates were back on the east coast and it was going to be their last episode. I was like, ‘Oh my god, I have to go see them. Dancing with them is such a big part of my childhood.’ So I visited them at Nationals and it was so amazing. Then I found out that the show was coming back for another season and my mom started talking to [the other moms] and we decided to go back for another season. It was pretty insane and out of nowhere.

With Abby Lee Miller gone from the show because of her upcoming jail sentence, the dancers are in need of a new teacher. Before Dancing With the Stars former pro Cheryl Burke joins the cast, choreographer Laurieann Gibson appears and takes on the role of instructor.

Gibson has had her own dance reality show in the past and appeared on several seasons of Sean Combs’ reality competition show Making the Band. Check out a clip of Gibson back in the day on Making the Band below. 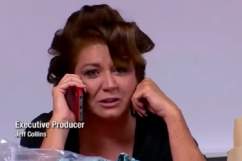