ABC/Bob D’AmicoDean Unglert poses for “Bachelor in Paradise”, but Unglert fans are hoping he will somehow be the next star of “The Bachelor.”

Dean Unglert was a fan-favorite cast member on Rachel Lindsay’s season of The Bachelorette, which just ended last week. He came in fourth place after his emotional hometown date with his estranged father. After his mother died, Unglert said that his “eccentric” father kind of checked out and he felt abandoned. Unglert and his father have a heart-to-heart, with emotions running high, but the conversation ended with Unglert’s father storming out of the house.

Prior to his hometown date airing, Dean Unglert took to Instagram to defend his father’s appearance and his dad’s religious choices. Unglert wrote:

I’m asking for a favor: when I said my father was eccentric, I was not referring to his Sikh faith or the turban he wears on his head. I’m not asking you to spare his feelings (or mine) but instead to be cognizant and accepting of the millions of people that belong to the Sikh community. Although he and I are not close, I respect my father’s decision to follow his heart and pursue the life he has chosen. Let us not criticize him for his appearance or his beliefs because by doing so we are disparaging an entire faith and culture that includes millions of people. And I know we are all better than that. That is all (for now).

Despite his family issues, Rachel Lindsay has maintained that they were not the reason she eliminated him on the show.

Now, Unglert heads into Paradise as a cast member on Bachelor in Paradise and he gets involved with Kristina Schulman from Nick Viall’s season of The Bachelor. While on The Bachelor, Schulman opened up about her childhood, growing up in Russia with her mother rarely by her side. She was often left without food and eventually was put in an orphanage. Schulman talked about the dangers of poverty and prostitution, which she was fortunate to avoid once her parents adopted her. They brought her to America and she has made the most out of her life because of them. Her story brought Nick Viall to tears and at one point, Viall told her that he had a great deal of respect for her but that she just wasn’t the woman for him.

Schulman is now a cast member on Bachelor in Paradise and she finds herself falling for Dean Unglert … but she isn’t the only one. Schulman’s love triangle with Unglert and another former Bachelor contestant named Danielle Lombard ends up being one of the biggest dramas of the season, according to Reality Steve. 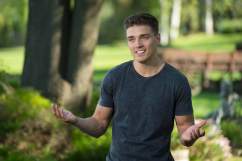 Dean Unglert, ‘The Bachelorette’ 2017: 5 Fast Facts You Need to Know

Read More
Bachelor In Paradise, Reality TV, TV
Kristina Schulman and Dean Unglert are one of the couples who date on Bachelor in Paradise 2017. Get to know more about each of them.