Recently on the new season of Flipping Out, Jeff Lewis’ longtime employee Vanina Alfaro confessed to the cameras that she had been unhappy at Jeff Lewis Design for about a year. After Lewis exploded on the phone to another employee and was upset about something he felt Alfaro did wrong, she had a bit of an emotional break. While riding in the car together, Alfaro cried that she just can’t deal with Lewis’ behavior anymore and that she wants to leave the company.

In more promo clips of the show, we see Lewis asking Alfaro when she’s planning on quitting. We’ve also seen, however, Lewis say that he will not accept her resignation, joking that their company is “like The Firm. You can never get out.” Alfaro’s official Bravo bio describes her as this:

Vanina was hired as an intern and has quickly risen to the role of Design Associate, becoming an indispensable asset to Jeff’s team. A dedicated and tireless worker, Vanina has earned Jeff’s trust and respect as both an employee and designer. A native Californian, Vanina also performs as a singer-songwriter in her limited spare time.

Viewers will have to wait and see if Alfaro actually leaves the company or not. Fans have seen Alfaro start out in the company as an intern and blossom into one of Jeff Lewis’ most valued employees. She appears to be unmarried and very dedicated to her work, but she cries to the cameras that she feels unappreciated. She has also said that she feels like no matter how hard she works, it is never enough.

Another big change in Lewis’ company this past year has been with his longtime housekeeper Zoila Chavez, who has retired. After 18 years with Lewis, a lot of dysfunction and many ups and downs, Chavez has hung up her broom and recently, Lewis opened up about her retirement to People, saying:

It’s been kind of rough. I’m happy for her new life, but of course we were sad over here and we miss her.

Lewis said that Chavez stayed for six months after his baby was born to help and today, they’ve been carrying on a relationship via text. 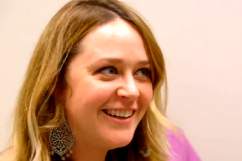 Who Is Jeff Lewis’ Surrogate Alexandra?