Ed Sheeran has been dating Cherry Seaborn for a couple of years now. The two went to high school together where they became great friends. Following high school, the two took their friendship to the next level. The two started off slowly, having a long distance relationship for about a year before deciding that they simply didn’t want to be away from one another.

In a recent interview with People Magazine, Sheeran opened up about falling in love with Seaborn.

“This has been the first time I’ve actually had the time to fall in love properly. So the catalyst of taking a year off was also the fact that my partner quit her job in New York—which she’s now got back in London, which is really cool—but we were just basically like, let’s quit our jobs and have a year of forming a tight bond. So we went traveling and spent every day for a year together. I’ve probably had three days apart from her in the last year…but we’re very, very strong. I’ve never been happier. I’ve never been more comfortable. I’ve never been more inspired. I feel like everything’s fallen into place, and it’s fallen into place because I’ve given it the time to fall into place,” Sheeran, 26, told People Magazine back in January.

It seems obvious that Seaborn was a muse for Sheeran’s latest album, Divide. His hit single “Shape of You” is a great example. Fans of Sheeran are convinced that several other songs including “Perfect” and “Hearts Don’t Break Around Here,” were also written with Seaborn as the inspiration.

Below are a couple of photos of Sheeran and Seaborn.

I dont get all the hate Cherry is having. I don't know her and I can't judge her based in what people say. If Ed is happy I'm happy. That's literally all I care about. {#edsheeran #cherryseaborn #cheeran #cheddy }

So, what’s next for Sheeran and Seaborn? Many think that they will get engaged soon. In fact, Sheeran sparked rumors that he got married when he was spotted wearing a silver band on that finger in an Instagram photo last summer. He might be thinking of an engagement — and a wedding — but he’s definitely thinking about becoming a dad. 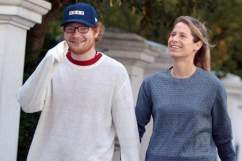 Read More
Ed Sheeran
Ed Sheeran has been dating Cherry Seaborn for a couple of years now, and even took some time off to foster his relationship.