Sheeran earns his money in various different ways. Over the past few years, Sheeran has released three studio albums, all of which have made him millions of dollars. He also earns money through songwriting, on tour, and by way of other endorsements and deals.

According to The Sun, Sheeran had 16 tracks off of his album Divide in the top 20 at the same time back in March.

According to The Mirror, Sheeran rakes in a whopping $19,000 per day.

When the Forbes list revealed that Sheeran earned a reported $57 million in 2015, the news apparently had a drastic impact on his relationships and social life, as friends came a’ calling with their hands out.

“The Forbes list actually f*cked it up,” Sheeran told Rolling Stone. “I was getting texts from people with pictures of cars going, ‘I’d like this for my birthday, please. This one’s only .06 percent of your annual income,'” he added.

Rolling Stone reported that, after he won the Grammy Award for Song of the Year, Sheeran flew to Iceland, from which he headed to rural Japan; Sheeran traveled in anonymity for an entire month from Hokkaido to Okinawa, a period in which he was able to “eat weird food, soak in the hot springs and ski.”

While Sheeran certainly isn’t the kind of guy who flaunts his money all over town, he has spent some serious cash on his house — and on a house for his parents.

Sheeran purchased his home in North London for over $11 million back in 2015. The home, which was looked at by Kim Kardashian and Kanye West, according to The Sun, boasts four bedrooms and is located in a wealthy area.

“Ed had to pay big money for the house but it’ll be worth it. He will be [neighbors] with some real high movers in business, sport and celebrity, which just shows how far he’s come. The house will be the ultimate party pad but also a place of work,” a source told The Sun at the time.

A few months later, Sheeran decided to buy a flat for his parents, John and Imogen — so he bought the property across the street from his new pad, dropping nearly $1 million.

“I bought them a flat. They already have a house. I got them a flat and a car in London so they can stay there. It’s opposite me as well. My thing is, I bought a house about a mile away from them where we live in a countryside, and I bought a flat and a house pretty much opposite each other in London. So when I have kids, when they start getting a little bit irritating, I’ve got the grandparents there,” Sheeran said after splurging on his parents.

Earlier this year, Sheeran settled a $20 million copyright infringement lawsuit. Songwriters Martin Harrington and Thomas Leonard went after Sheeran, claiming that his song, “Photograph,” was stolen from them. According to The Hollywood Reporter, the court documents revealed the complaint which was listed as “verbatim, note-for-note copying.”

The exact terms of the settled case were not made available to the public. It is unknown if Sheeran forked over any money in the settlement.

“Songwriting credits in the BMI database now have added Harrington and Leonard as co-authors along with Sheeran and Johnny McDaid. What’s more, it appears that the two plaintiffs have gained a significant share of royalties. Before the lawsuit, 100 percent of the work was controlled by BMI, which administers the public performance of McDaid’s works, but now that percentage has dropped to 82.5 percent as Leonard has an ASCAP affiliation,” reads The Hollywood Reporter.

‌According to Forbes, Sheeran has earned $37 million in just the first half of 2017, as estimated by June 12. His income is apparently greater than the previous year.

“After a quiet 2016, Sheeran burst into 2017 with hit album, ‘÷,’ which boasted two singles that both broke Spotify records with a combined total of over 13 million streams in 24 hours,” Forbes reports.

Sheeran is following up his studio success with a sold-out, global arena tour. Perhaps his album might have spawned another massive hit, if he’d kept “Your Song” for himself.

“Rita Ora has a song coming out in a couple weeks, I don’t even know what they titled it, and that’s a song if it hadn’t gone to her, I would’ve kept it and released it,” Sheeran told Billboard in June.

Fortunately, Sheeran made the right decision in keeping “Shape of You,” which he said was originally meant for Little Mix and Rihanna. 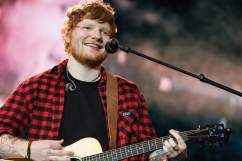 Read More
Ed Sheeran, Net Worth 5 Fast Facts
Ed Sheeran is one of the highest paid celebrities. He earns money through his music, songwriting, and his tours.