Emma Stone became one of Hollywood’s most sought after actresses following her Oscar-winning performance in La La Land and now she’s Hollywood’s highest paid leading lady. In Forbes ranking of the highest paid actresses for 2017, Stone topped the list, having earned $26 million during Forbes’ 12 month scoring period. According to Forbes, Stone “scored her largest ever annual take-home and is the biggest dollar and percent gainer, year over year, of anyone on the list.”

Jennifer Lawrence, who sat in the top spot in 2015 and 2016, slipped to third place. Lawrence earned $24 million, a tick under half of what she had earned the previous year, thanks in large part to her work in The Hunger Games franchise. Lawrence is starring in Darren Aronofsky’s upcoming thriller Mother!, which will be released this fall. 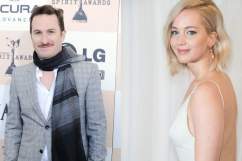 Forbes‘ scoring period runs from June 1, 2016 through June 1, 2017 and the earnings included in their list represent earnings made before taxes and fees paid out to agents, lawyers and managers. Earnings are estimated after reviewing and analyzing data culled from Nielson, ComScore, Box Office Mojo and IMDB, in addition to interviews conducted with industry insiders.

Sitting in between Stone and Lawrence is Jennifer Aniston, who earned $25.5 million. Aniston is still out there cashing those Friends checks, but also makes the bulk of her money via endorsements. Aniston currently endorses Emirates airlines, Smartwater and Aveeno. In 2016 Aniston appeared in a handful of films, most notably Office Christmas Party, which grossed nearly $115 million worldwide.

GettyEmma Watson, the star of ‘Beauty and the Beast’ is a first-timer on the Forbes list

Emma Watson is the list’s lone newcomer. Watson made $14 million, good enough for sixth place and tying her with Charlize Theron. Beauty and the Beast, starring Watson as Belle, is the highest grossing movie of the year so far, having pulled in $1.26 billion. Watson also appeared in The Circle, based on the book by Dave Eggers, in which she shared billing with Tom Hanks.

Some behind the numbers information:

The total amount earned by the ten women on the list is $172.5 million. The cumulative total is down from recent years. In 2016, the number was $205 million.