At the end of last season, it was decided that actress Erinn Hayes would no longer be on Kevin James’ comedy series, Kevin Can Wait. After James’ on-screen reunion with former King Of Queens co-star Leah Remini, Hayes was basically pushed aside so that Remini could have a permanent spot on the show. It was later revealed that Hayes wouldn’t be on the next season of the show at all, leaving many fans wondering exactly how producers would handle the switch.

As Hayes played the role of James’ wife, Donna Gable, there really wasn’t room for another main female part. Although Remini played a detective in just a handful of episodes last season, producers really felt that the chemistry between James and Remini was palpable — as it always has been — and they decided to remove Hayes from the upcoming credits altogether.

On Tuesday, Hayes started trending on Twitter after Senior Exec VP of Programming Thom Sherman revealed that Hayes’ character will be killed off the show.

“The character will have passed away,” Sherman said, according to Deadline. He added that Season 2 will be a time jump, fast forwarding at least a year, probably longer. It’s unknown how the show will progress, but it is believed that Kevin Gable will be romantically involved with Remini’s character, Vanessa.

The show, which has been an easy, breezy comedy up until this point, may or may not dive into the deep issues of losing a loved one. It sounds like the script will work in Donna Gable’s death, perhaps in passing, and move forward swiftly with Kevin and Vanessa’s plot.

When asked about the similarities in shows and if Kevin Can Wait would essentially become a spinoff of The King Of Queens, Sherman said “no.”

“No, I don’t think so. I think the show speaks for itself and stands for itself. Obviously, the chemistry [between James and Remini] was amazing in the stunt episodes,” he said. 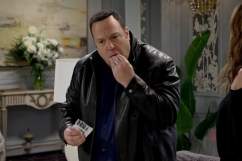 ‘Kevin Can Wait’: Will the Show Return for Season 2?