There’s a lot of confusion about the timeline on Game of Thrones Season 7 Episode 6 and concern by fans that we’re dealing with some big plot holes again. But other fans have endeavored to explain how long everything took and show that maybe things aren’t as strange as they might appear at first glance.

One Redditor put together a detailed timeline of the entire season, which you can read here. (But warning: The comments might contain spoilers since this is a spoiler-friendly subreddit.) In the post, he explains the following.

Someone tell me how they got from Dragonstone to Eastwatch in 5 mins #gots07e05 #GameOfThrones pic.twitter.com/UfZVUj1laN

Jon and the crew likely hadn’t gotten very far from Eastwatch by the time they caught that wight, since Gendry could reach the Wall from their location by running non-stop. They likely traveled slower because of the supplies they were carrying and their later injuries. So perhaps they were just 10 to 15 miles from Eastwatch, which would give Gendry a two to three hour run.

A raven can probably fly about 500 to 700 miles a day. This means that a raven would take two to three days to reach Dany from Eastwatch.

So Jon and the crew were likely on the rock, under siege by the Night King and his wights, for about three days before Dany arrived.

Another Redditor who created his own timeline came to the same conclusion about ravens: it would take them two days (at their fastest rate) to fly from Eastwatch to Dragonstone. But he estimated the dragon would take longer to reach Jon, so he guessed they were on the ice for probably four days, not three.

And if you think about it, this makes sense. Jon and the crew were on the rock long enough for the ice lake to freeze over again and support all that weight on it. That would likely take at least two days to happen. (Unless you suppose that the White Walkers’ winter magic can freeze things much faster than normal.)

Of course, this also makes you wonder — if it took even the shortest amount of time of two to three days — why weren’t Jon and the crew weaker after spending so much time out on the snow? Well, maybe it’s really not that complicated. Tormund was prepared for those types of conditions. And Starks do well in the cold. But what about Beric? Or the Hound? The crew likely had a lot of supplies with them, including food and water in case their journey was long. So they could have kept at least some of their strength up that way. Not every fan agrees with this theory though. Some think they were definitely only there for a day, making the timeline unrealistic.

What do you think? Does the timeline make sense, or do you still think that the show took liberties and let people and animals travel faster than they should have been able to travel? Let us know in the comments below. 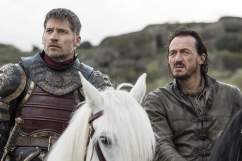