Fans have been wanting to see a reunion between The Hound and the strangely reanimated The Mountain, and it’s finally here. Thank you Game of Thrones. We may not have gotten the Cleganebowl that we’ve always wanted, but it looks like it still might happen. But some fans couldn’t quite hear what The Hound said to the Mountain while they were standing in the Dragonpit. And others weren’t quite sure what he meant. Here’s what you need to know.

Spoilers through the Season 7 Finale below.

First, the Hound talked about how now The Mountain actually looks worse than he does. And that’s true. The Mountain’s face is so horrid that he can never take off his helmet.

Then The Hound said:

You know who’s coming for you. You’ve always known”

Yes, the Hound’s goal is still to ultimately kill the Mountain and take revenge on him. The Mountain burned the Hound’s face and tortured his brother. It looks like we will still get “Cleganebowl.”

But the Hound knew that the meeting in the Dragonpit wasn’t the time to take his revenge, because so much else was at stake. He later carried the wight into the Dragonpit all by himself and had kept an eye on the wight all through the journey to King’s Landing. He saw how much was sacrificed to bring the wight to Cersei, and he wasn’t going to ruin all of that for his own revenge.

My bet is on The Hound to win the ultimate battle between brothers.

Fans are, of course, ecstatic about the two finally meeting again, and they’re talking about it online.

when the Hound came up to the Mountain and confronted him talking about "you know who's coming for you, you've always known" #GameOfThrones pic.twitter.com/BLKS2fPGQt

The hound when he saw the mountain #GameofThrones pic.twitter.com/tOPtQbDqeg

People talking about #MayweathervMcgregor but the only fight I want to see this weekend is the Hound vs the Mountain. ?

What did you think about their reunion? 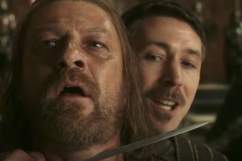 ‘Game of Thrones’: When Did Littlefinger Hold a Knife to Ned Stark’s Neck? [VIDEO]